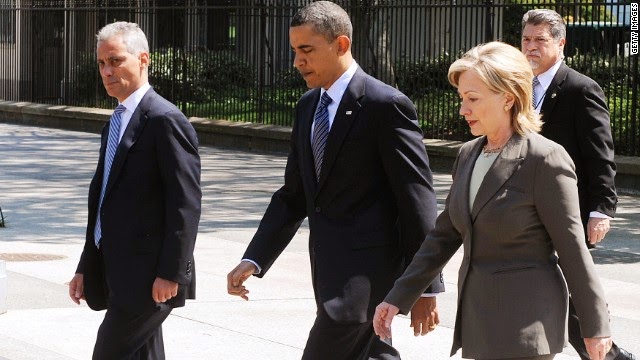 Big news today is that Rahm endorses Hillary for president (before she even announces her candidacy) and starts a pro-Clinton super PAC. Could that be the kiss of death? Everything Rahm touches seems to go south. Latest polls show his job performance disapproval ratings now at 40 percent — up from 29 percent a year before.


Compared with last year, Emanuel's negatives are up significantly among African-Americans. Now, more black voters disapprove than approve of his handling of the mayor's office. That's turned around from a year ago. Though Emanuel's approval rating among white voters is similar to last May, the number of those who disapprove also is growing.

The mayor found his last 12 months dominated by issues of increased gun violence. He has maintained a battle with unionized public school teachers over proposed school closings in a system serving a majority of minority students. And the issue of job growth and economic development has been a problem as unemployment remains above 10 percent. -- Tribune

My advice to Hill -- Watch the PAC money and watch your back.

15 MORE SHOT IN POT HOLE TOWN... That's as of this morning and only since Thursday afternoon. Most of the shootings took place on the south side. Rahm continues to view city's pandemic gun violence as a policing/jailing problem. But southsider Derrick Rose, who just attended another funeral for 14-year-old Endia Martin,  knows better. "It all starts with poverty," says Derrick. "People are just surviving, just really trying to get out."