Chicago, a year after the closings 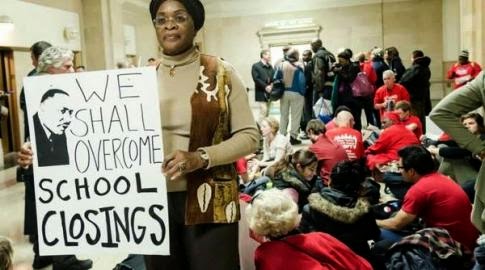 “School closings have done nothing to improve the education of CPS students, nor have they saved money, but the same policies that led to massive closures continue to be implemented.” -- CTU Report

Two major reports came out of Chicago this week. The first, from the CTU, finds that despite promises, the closing of 50 schools last year made conditions worse for students in both the closed and receiving schools. The union’s report, released Wednesday, contradicts the victory speech CPS CEO Barbara Byrd-Bennett made in March, when she told the Board of Education that the closings made the district stronger. They didn't. The supposed cost savings just meant that millions of dollars were spent elsewhere.

For example, every welcoming school was promised a library, a computer lab, iPads for every third- through eighth-grader. Four new libraries were installed, and several others were upgraded, but only 38 percent of all the welcoming schools have a librarian, compared with 55 percent of elementary schools districtwide, according to the CTU.

Computer labs were upgraded, but only a fifth of these schools have a technology teacher, the report said, and iPads were purchased but without many related training opportunities for teachers. A good deal for Apple. Not so much for students.


Of the $83.5 million spent on transitions in 2013 and 2014, only $9.3 million of that went directly to schools, with the bulk paying for the “web of supports made necessary to manage the chaos of the largest school closures the district, or any school district, has ever undergone,” including $30 million to a logistics company, the report says.

CHARTERS & KIDS WITH DISABILITIES... The second study, authored by some of my colleagues at CReATE finds that Charters continue to enroll fewer special education students than do neighborhood public schools, but that percentage of students has increased each year. Students with IEPs are no longer under represented in charter schools to the extent that they were five years ago, particularly at the high school level.


The tendency of charters to serve fewer students with extensive support needs combined with the closing of neighborhood schools, suggest that these  students may have fewer choices than their less disabled peers to be included in schools with their typically developing peers. This disproportionally affects black and Latino students with these disabilities as they tend to live in the neighborhoods most affected by the closing of neighborhood and opening of charter schools.

THE PRINCIPAL REVOLT... And don't miss Ben Joravsky in The Reader on the Chicago principals revolt.


I'm talking about the ongoing fallout over an op-ed in the Sun-Times on May 9 that was written by Troy LaRaviere, principal of Blaine, a grammar school in Lakeview. Man, oh man—LaRaviere's piece is the greatest tell-it-like-it-is putdown of phonies since Bob Dylan went off in "Positively 4th Street." You know how it goes: "You got a lot of nerve to say you are my friend . . . "

According to Ben, Byrd-Bennett told reporters "that she was shocked—shocked, I tell you—to learn that some principals felt so used and abused. Then she basically blamed it on the communications office—as though some press release writer had gone rogue and started beating up on principals."

But Joravsky is also merciless on principals for allowing themselves to be used by Rahm and BBB to hammer teachers, especially during the teachers strike, and on the Principals Association for its passivity.

Another Joravsky good read.
Posted by Mike Klonsky at 6:54 AM