It's the new, improved Rahm. 'Doesn't believe in personal insults...'

Here's Blaine Principal Troy LaRaviere laying it all out on Chicago Tonight.

PARTY LINE...You can always tell when the line comes down from the 5th floor at City Hall. It's picked up quickly and echoed down the halls and through the cubicles at Clark Street -- "That LaRaviere guy and those other principals are in league with Karen Lewis and the teachers union."

But by the time flack Sarah Hamilton's message reaches the end of the line, it doesn't always come out the way it was intended. Yesterday it was first mouthed clumsily by Rahm's attack dog, John Kupper who came right out and called CPA Pres. Clarice Berry, "a CTU shill". Yes, and that was the message coming from Hamilton's newly-created version of the warm, fuzzy ("I welcome principals' concerns and ideas") Rahm.

After Berry fired back with both barrels, Rahm made Kupper apologize.


“I regret my reckless remark and offer Dr. Berry my public apology,” Kupper wrote in an email to the Sun-Times.

BTW, Berry's full statement, which appeared in an earlier version of Fran Spielman's E&O report is now gone. But you can read it in full, here.


“Mayor Emanuel does not agree with what John Kupper said nor the sentiment behind it, and he believes personal insults have no place in public debate." 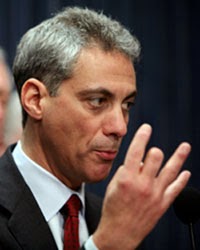 Wait, what? Rahm doesn't believe in using personal insults in public debate? That's right. This is the new, improved Rahm. Not the one who dropped the F-Bomb on Karen Lewis. Not the one who called a group of liberal activists "f—ing retarded." Not the Rahm who repeatedly insulted Chuck Todd, suggesting he was ignorant about charter schools, was "backward" looking, and that being in Washington had affected "your brain." Not the Rahm who threatened to kill  Energy Sec. Stephen Chu if he talked about climate change.

C'mon Rahm. Don't wuss out on us now.

Next came this toned-down version of the line from gadfly blogger Alexander Russo. No he's not on staff but he's a quick study.


I keep wondering whether LaRaviere is an independent mind speaking out against CPS and anyone else who gets in the way of making Chicago schools better or whether he's one among many who've come to loathe the Mayor so much that he's allied himself with the union across the board.

Yes, he was just "wondering."

LOVE THIS...Thanks WBEZ, Young Chicago Authors, Free Write Jail Arts and the Chicago Community Trust for helping Louder Than a Bomb give voice to the brilliant young poets locked up inside the Cook County Detention Center. And be sure and check out these amazing WBEZ photos by By Bill Healy.

Stay dry and have a great Rahm-less weekend.

Email ThisBlogThis!Share to TwitterShare to FacebookShare to Pinterest
Labels: Louder than a bomb, principals, RAHM