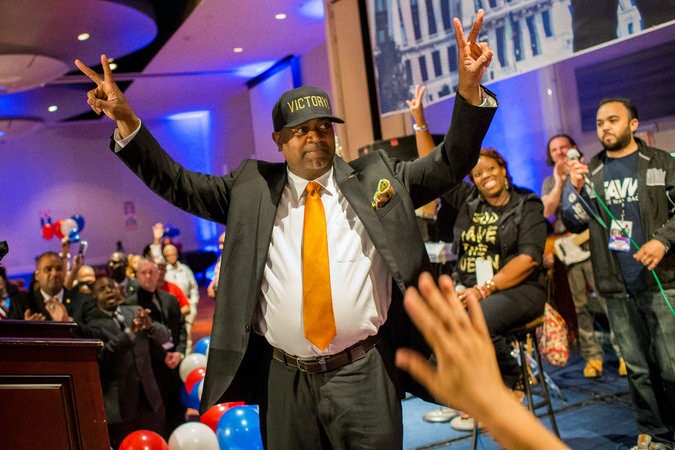 Speaking to the crowd, Baraka wished his mother a happy Mother's Day and said he knew his father, who died in January, was "in the room tonight." He urged the crowd to "be the mayor" and work for positive change, a reference to one of his campaign slogans, "When I become mayor, we become mayor." -- AP Wire

Yesterday's historic victory of Ras Baraka over corporate-backed Shavar Jeffries, following on the heels of progressive mayoral wins in New York, L.A. and a string of other cities, has meaning way beyond Newark. Harold Meyerson, writing on Bill Moyers' blog calls it, "the revolt of the cities." Baraka, who served as principal of Central High School, in addition to his duties as councilman, made opposition to school closings and corporate reform an integral part of his platform.

Despite millions of dollars being poured into Jeffries' superPAC by panicked DFER and other corporate school reformers, Baraka was able to ride the power of an independent Working Families movement, built on an alliance between organized labor (teachers and public sector workers in the lead) and the black community. Believe me when I tell you that with the 2015 mayoral race approaching, we here in Chicago are watching Newark closely and hopefully drawing the appropriate lessons.

DUNCAN SILENT...Funny, I don't hear Arne Duncan even mentioning mayoral control these days. Remember when it was his no.1 priority? Now with Corey Booker out, Chris Christie under investigation, Cami Anderson's "One Newark" plan for school closings and charter school proliferation in the toilet, and Chris Cerf gone to work for Murdoch,  the DFER heldge-fund reformers must be in a state of shock and awe.


Baraka's biggest line of the night: Today is the day that we say goodbye to the bosses... We have to keep the schools open. #BelieveInNewark