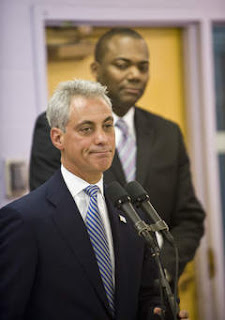 What we all knew months ago is now official. Jean-Claude ("Don't call me a puppet") Brizard is out. Barbara Byrd-Bennett is in.

It was all so predictable. J.C. Brizard was never anything more than Rahm's front man. Just another of those itinerant, what-do-you-want-me-to-do-boss, bureaucrats who moves from job to job every couple of years collecting a fat pay check and a golden parachute. If he's Arne-Duncan-lucky, he may even be primed for a political career and go to Washington to play in the big leagues at the DOE. If he's Paul Vallas, he moves on to Philadelphia and then New Orleans, where he turns a natural disaster into a Mecca for privatization.

But unlike his non-educator predecessors, Vallas, Duncan and Huberman (who was brought over from the police department and then the CTA to City Hall's education department for two years)  Brizard was what my brother Fred jokingly calls, a wuzza -- a former real-life New York City educator.

But he had long been gone from the classroom or any direct contact with teaching and learning. Instead he had been recruited from the ranks to go through Eli Broad's superintendent's training academy where, like his friend, Michelle Rhee in D.C., he learned the art of union busting, mass teacher firing, school closing and privatization -- the prototype leader/manager for corporate reform. Former N.Y. Chancellor Joel Klein hired him as a manager and then he was brought in to Rochester to take on the teachers union.

It was Klein who made clear the role bureaucrats like Brizard play. He served the mayor as his buffer, ready to take the political fall after doing Bloomberg or Emanuel's dirty work.

He lasted only slightly more than three years in Rochester before becoming politically untenable when his autocratic style, a testing scandal, and fiscal mismanagement earned him an unprecedented 95% no-confidence vote of the city's teachers. Rahm looked at that vote and said to himself, "Ah, perfect. Just the man I need." When Rahm called, Brizard jumped ship without giving his board notice, leaving them in the lurch.

Just in case anyone had any illusions that this guy was anything more than Rahm's go-for, he wasn't even allowed to talk to the press for days after his arrival in Chicago, long enough to be sequestered and scripted by Rahm's boys.


Finally cornered in the corridors of the Rochester School District Thursday evening by a Sun-Times reporter, the man the mayor-elect picked to run the nation’s third largest school district beamed his winning smile, leaned in and asked, “How can I help you, without getting in trouble?” -- Sun-Times

He still didn't always get it right and often blurted out his disdain for public schools and his bias towards privatization. Speaking before a group of corporate reformers back in March, Brizard said:


“It doesn’t make sense (that) our parents pay taxes and then pay tuition (for their children) to go to (private) school as well.”

Brizard's role in school closings earned him the hatred of not only teachers, but community groups as well. At one board meeting in December, 2011, community protesters drowned out Brizard's voice as he was about to announce the closing of more schools, turning them over to private charter school management companies.

“You have failed…You have produced chaos…You should be fired” they chanted. When they paused, billionaire board president David Vitale said he hoped they had “gotten it out of their system.” They hadn't.

We all know now that Brizard's final undoing was his "mishandling" of the contract negotiations. When it became clear that Brizard had no juice, he was pulled from the negotiations and they were turned over to board president David Vitale to manage directly. The victorious strike and Rahm's plummeting poll ratings were final nails in Brizard's coffin. But even in the weeks leading up to the strike, Brizard could be seen running from the media and cancelling public appearances. He must have known he was already toast.

His replacement, former Cleveland Supt. Barbara Byrd-Bennett -- more on BBB later-- was actually put in place (without the customary search) in April, serving as a mysterious shadow figure as "interim Chief Education Officer" but never showing her face until a few weeks ago. It soon became clear that she was already playing the role in the contract negotiations in place of Brizard who had lost all credibility.
Posted by Mike Klonsky at 8:11 AM