As votes in Chicago are being counted... 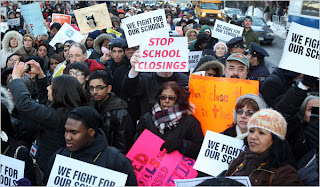 
On Tuesday, [CTU President Karen] Lewis framed the school-closing issue as community participation in decision-making. “The student voices were heard, but they were ignored,” Lewis said. “These decisions are badly made. They don’t take into account the community, but rather sit in rooms amid spreadsheets.”

After voting , Lewis joined a group of Dyett students, flanked by members of the Kenwood Oakland Community Organization. The students and leaders of KOCO are still trying to get the decision to close Dyett reversed through a civil rights complaint and a campaign to get the federal government to put a moratorium on school closings. These efforts are longshots considering the U.S. Department of Education is run by Arne Duncan, who started school closings in Chicago. -- Catalyst

He issues a challenge to Diane, Deb, and me and "to all the others who take issue with me when I say that the unions must be clearer about what needs to change.":


If we really want to change the direction of reform then we have to articulate a clear strategy on how it can be achieved. It can't just be a new set of slogans or a manifesto like that adopted by the CTU ("The Schools Chicago's Children Deserve")...We must articulate a strategy for mitigating the effects of poverty as we have tried to do with the Broader, Bolder Approach because it's not good enough to say that change is not possible until poverty is eliminated... Bridging Differences

I'm not sure why my old friend Pedro is "issuing a challenge" to me. I can't speak for "all the others", but I have never claimed that "change is not possible until poverty is eliminated." In fact, in the many years I have been involved in the struggle to save and transform public education, I actually have never heard anyone make such an outlandish claim.

BTW, Pedro will be one of the keynote speakers at the upcoming Fall Forum of the Coalition of Essential Schools in Providence on Nov. 9-11. Teacher and CTU activist Xian Barrett, Deb Meier and I will also be there, speaking together on a panel about the struggle in Chicago.


While 30,000 CPS teachers and staff voted on whether to accept their hard-won contract yesterday, UNO and other charter operators bused supporters over to UIC to hold a pro-charter, anti-union rally of their own.


"They negotiated a contract, but it should not be at the expense of charter schools," said Juan Rangel, chief executive officer of United Neighborhood Organization, a politically connected charter operator who helped organize Tuesday's rally. "When you have a teacher's union whose agenda is to eliminate charter schools there's always concern." -- Chicago Tribune

Actually, it's not union "opposition to charters" that Rangel is worrying about. It's their effort to organize and unionize charter teachers that has him up at night. Then there's the latest data showing that UNO's charter schools are not performing well, even by their own standards.

Ben Joravsky lays it out crisp and clear:


There are 541 elementary schools in Chicago. Based on the composite ISAT scores for 2011—the last full set available—none of the top ten are charters. None of the top 20, 30, or 40 either... The highest ranking UNO campus, Marquez, came in at 99. UNO's Fuentes campus—the one theTribune highlighted—ranks 128. That's two positions behind Linne, the unionized public school in the neighborhood...  Anyway, for all those keeping score back at home, the highest-ranking UNO school comes in at 99, the lowest at 407. Quick—fire some teachers!