What's wrong with this picture? The man in the middle. 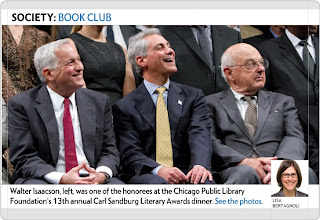 Why Rahm is allowed within 100 feet of a library awards dinner escapes me. He presides over a school system that has 160 schools with no libraries. That was one of the big issues raised by teachers during the strike. As for the Chicago Public Library system, it has been devastated by massive budget cuts and layoffs, coming from the 5th floor of City Hall. 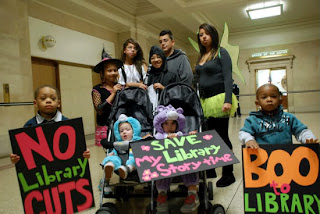 Rahm’s attack on Chicago libraries began exactly one year ago. His cuts included reduction of library hours, the loss of 363 full-time positions, and the closing of libraries on Monday and Friday mornings for a grand total of 10 million dollars in “savings”. This set off a wave of parent and community protests. One was even led by a local Girl Scout troupe. 28 of 50 aldermen found enough nerve to send the mayor an angry letter about the library cuts.

So Rahm, shame on you for showing up for photo ops at the Library Foundation dinner. Get the hell off that stage. Stop mugging for the damn cameras and do something to restore our once-great library system and to rehire our lost librarians.