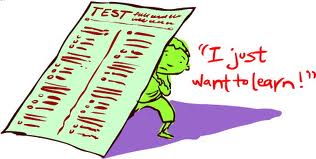 Blume reports that State officials have stripped the schools of a key state ranking for "cheating, other misconduct or mistakes" that in other times or in the eyes of artful, progressive educators might have been taken for -- well, just good teaching. For example, these misdemeanors included  failing to cover bulletin boards and "more overt improprieties" like "helping students correct mistakes." A fifth-grade teacher at Short Avenue Elementary in the Del Rey neighborhood, "told her students in advance to jot down such helpful clues as multiplication tables, fraction-to-decimal conversions and number lines on scratch paper prior to starting the tests.


On exam day, she allegedly walked around the classroom making encouraging remarks to make sure students followed through. That sort of test-day coaching is against the rules and cost Short Avenue its ranking. The teacher has since retired, according to the district.

What's really revealed in Blume's article is the now explicit purpose of education in California and a host of other states plagued by the cheating pandemic. It is certainly not to teach kids to think, reason and grow intellectually, physically, socially, and emotionally. Rather it's to sort and track children and to reward and punish schools and teachers based on a score on a bubble test. 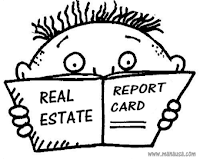 
"is a scale by which schools are officially measured in California. Top rankings are celebrated and contribute to high property values. Low scores can label schools as failures and trigger penalties."

It should be obvious by now that the real cheating taking place is the waste of days and months spent on this so-called, race-to-the-top, robbing students and teachers of valuable learning experiences and turning otherwise good teachers into proctors, delivery clerks, or even real-estate criminals.

Also see the accompanying Times piece, " Measuring the worth of a teacher?" by Teresa Watanabe which reveals how L.A.'s so-called Growth Over Time measurement system of teachers' worth is a farce in the eyes of many district teachers.


Lisa Alva, a Roosevelt High School English teacher, said her score for last school year was based on 12 students and wonders how that can be valid or fair. Philip Gerlach at Markham Middle School got sterling scores but said they were skewed downward by counting students he had for just two months and don't measure his strongest suit — teaching writing.

For those who missed it, here's so-called Value-Added formula which L.A.U.S.D. uses to evaluate its teachers:

Email ThisBlogThis!Share to TwitterShare to FacebookShare to Pinterest
Labels: testing