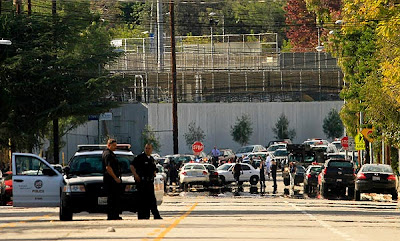 
"No food was given. My son and daughter said classmates were peeing into trash cans," said Odette Fulliam, whose children attend Hale and El Camino. In fact, a 5-gallon pail is part of a "lockdown kit" that is supposed to be accessible to every classroom. The pail with a removable lid is "solely for the purpose of this kind of situation," said district spokesman Robert Alaniz. --L.A. Times)


"I don't think there's any doubt that what they want to do is silence us, and I think that's what you see going on around the country," said David Stout, a spokesman for the Alabama Education Association, an affiliate of the National Education Association. "There's an organized movement to hamper the voice of what unions do in public education." --Sacramento Bee

"The Chinese regime is advancing its own interests in the West—including Walter Payton College Prep—by, in effect, bribing school systems, educators, and students to see the world through Chinese eyes and, of course, to turn blind eyes and deaf ears toward anyone who might raise concerns about the innumerable threats that Beijing poses to America’s future." -- Fordham Foundation's Checker Finn


"Consider: A corporate leader who increases profits by slashing his work force is thought to be successful. Well, that’s more or less what has happened in America recently: employment is way down, but profits are hitting new records. Who, exactly, considers this economic success?" -- Paul Krugman, N.Y. Times