That old gang of mine 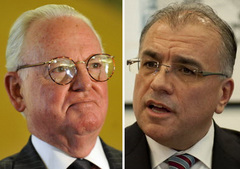 Ed Burke and Gery Chico are back together again at long last. Ald. Edward "Slow Eddie" Burke, powerful chairman of the City Council’s Finance Committee announced his support for Chico, his longtime friend and protege, in the race for mayor.

Back in the day, Burke and Chico were both part of the infamous Vrdolyak 29, the all-white Chicago City Council's majority bloc that tried to thwart the city's first black mayor, Harold Washington. The 29 were led by Alderman Edward “Fast Eddie” Vrdolyak of the 10th Ward and "Slow Eddie" from the 14th. Chico served as a staffer on Burke's committee and learned politics from his mentor, Burke. He later served as Mayor Daley's hand-picked school-board president.

According to today's Sun-Times:


In 1989, Burke dropped out of the mayor’s race and threw his support to Daley. The deal restored Burke to the role of Finance Committee chairman he had held during Council Wars...Chico served as a Finance Committee staffer under Burke during Council Wars. Burke’s 14th Ward Democratic Regular Democratic Organization circulated Chico’s nominating petitions. Members of the Chico family are longtime residents of the 14th Ward. ("Burke backing buddy Chico in mayoral race")


Chico is the candidate of powerful Southwest Sider bosses who want to stop Rahm Emanuel from establishing another autocratic regime. As Burke said this week, it’s going to be “a new day” in City Hall -- meaning he wants a more powerful City Council.