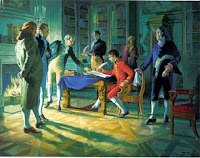 
“Gery thinks the parking meter deal was the worst since the Louisiana Purchase."

I don't know what beef Chico has with the Louisiana Purchase. I mean, the U.S. got all of present-day Arkansas, Missouri, Iowa, Oklahoma, Kansas, Nebraska, parts of Minnesota, most of North Dakota, nearly all of South Dakota, northeastern New Mexico, portions of Montana, Wyoming, Colorado and Louisiana, including the city of New Orleans, from cash-hungry Napoleon for a mere $15 million.

The only problem with the deal, so far as I'm concerned is, Louisiana ended up with Bobby Jindal running the state and Paul Vallas running New Orleans schools. Surely Thomas Jefferson could have written something into the contract to prevent such catastrophes.