Latest from the Ownership Society 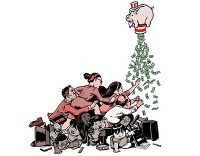 The greed mongers
"In K-12 education, we submit, greed can be good, albeit ugly." --Fordham's Finn & Hess

Conservative think-tankers like Rick Hess are critical of Arne Duncan's i3 reform plan because, they complain, there's not enough room for for-profit companies to feed their bottom lines in the ed reform biz.


Their selfish pursuit of profit gives them cause to be more aggressive about expansion, more nimble about abandoning failed efforts and seeking new niches, and more energetic about rooting out inefficiency.

Hess frets that giant text book and test publishers will be at a disadvantage when up against non-profits like ETS, as they try to out-wiggle each other to the DOE's feeding troth. Don't worry Rick. I'm sure Pearson will find their way in.
Posted by Mike Klonsky at 8:58 AM