Eason-Watkins on her way out... just as I predicted 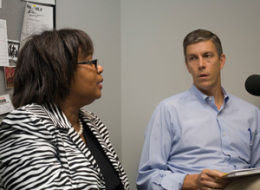 In September, I wrote about Ron Huberman's "house cleaning" of Arne Ducan's CPS staffers. It was right about the time that Huberman dumped his new-schools chief, Josh Edelman when I wrote:


Word is that he's consolidating budget people from the various departments and is cleaning house of Arne Duncan's people. New schools/charters manager Josh Edelman went last week. Chief Ed Officer Barbara Eason-Watkins, will be next. He will replace most with Mayor Daley's people and his old team from over at CTA. But don't worry about Edelman and Watkins. Both will most likely land on their feet with Duncan in D.C.

This morning, Sun-Times columnist Sheila Foster tells us that indeed, Dr. Eason-Watkins, one of the few remaining black educators (or educators period) in the CPS hierarchy, will be leaving to run another devastated school district in Michigan City, Indiana. Edelman did end up on his feet in D.C.--not with Duncan, but running behind the broom-wielding Michelle Rhee.

At the time, Catalyst called my prediction "highly speculative." Duh! But now they too are saying that Eason-Watkins is toast in Chicago. I demand an apology.


Readers may recall Catalyst's own highly speculative reporting from Dec.'08: "Eason-Watkins to be next Schools Chief."
Posted by Mike Klonsky at 11:55 AM