What happens when Democrats take their lead from McCain/Palin 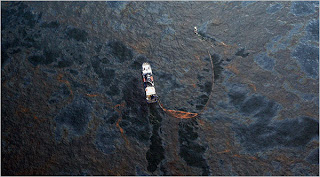 "Drill baby, drill?"
The worst eco-disaster in U.S. history is taking place in the Gulf. BP Oil's race to the top has even got T-bagger politicians like Gov. Jindal crying for help from BIG GOVERNMENT.

But it was just three weeks ago that Obama and the Democrats themselves were calling on congress to open vast expanses of water along the Atlantic coastline, the eastern Gulf of Mexico and the north coast of Alaska to the big oil companies. This was their way of  "reaching across the aisle" to the Limbaugh Party of No.

Watching the seemingly boundless glob of crude, now bigger than the state of West Virginia, washing up the mouth of the Mississippi and on to the eco-sanctuaries of Louisiana, destroying the fishing industry and everything natural in its path, I can't help but recall Diane Ravitch's comparison of the current Arne Duncan-led ed reform to an "educational tsunami," another pathetic attempt by Democrats, to echo the market-driven policies of the neo-cons.


It seems that whenever Obama stands up and acts the way he promised to act during the election campaign, good things can happen, ie. passage of the health care bill and now potentially Wall St. Reform. But when he and the Democrats cave in and mimic McCain/Palin, it's a national disaster waiting to happen--ie. expansion of the war in Afghanistan, drill, baby drill and test baby, test.
Posted by Mike Klonsky at 8:15 AM