Should we work to turn low-scoring schools around?

Or are school closings and charters the only way?

I'm in Cleveland at KnowledgeWorks annual Leadership Institute. Great crowd of educators from all over. Last night's forum, led by EdWorks' Director Harold Brown, asked if it's possible to turn around failing schools? Keynoter was Richard Kahlenberg of the Century Foundation. He wrote the solid biography of Al Shanker and now seems like Shanker reincarnate, for better and worse. He makes a strong case for economic desegregation of schools as the key to school improvement.

He was followed by a panel of respondents that even included an educator (OMG! Thank you KnowledgeWorks), Sharon Johnson, a principal who led a turnaround at Wilson High in Cincinnati, thereby answering the framing question. Right? No, you don't have to close schools and fire all the teachers. You listening Arne? She even talked about teaching/learning issues, supports for teachers, etc... Be still my beating heart.

But the Fordham Institute's Andy Smarick, holding down the far right-wing of the panel, was having none of it. Smarick claimed that it was a waste of "human capital" to invest in low-performing schools. We should disinvest and only open new charters. It was a market-driven strategy of survival of the fittest right down to praise for the Central Falls firings and merit pay. Irony--this far-right perspective is the very heart of Duncan's Race To The Top strategy.


But that didn't stop me from having a friendly but probably existential give-and-take with Andy after dessert. Hey, I saw Diane Ravitch arm-in-arm with Bill Ayers last week at UIC. A new world is possible.
****** 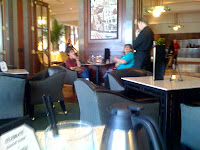 Also in Cleveland yesterday, a gaggle of T-baggers protesting tax day. I sat next to two of them in the hotel coffee shop. They were trying to win-over, recruit the waiter. "Pregnant Mexicans are sneaking across border to have their babies. We pay for it with our taxes." Waiter nods." Can I bring u some dessert?"
Posted by Mike Klonsky at 6:51 AM

Email ThisBlogThis!Share to TwitterShare to FacebookShare to Pinterest
Labels: turnarounds