Who got to Rhee? 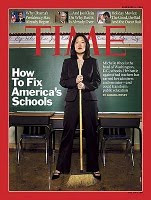 Rhee came to town several years with a broom, intent on sweeping away all that she didn’t like and starting fresh.That was an approach doomed to fail. --Valerie Strauss

Less than a month after Anita Dunn's clout-heavy firm was brought in to manage Michelle Rhee's battered broom-wielding persona, the D.C. school boss has finally agreed to terms with the teachers union leadership. The deal, signed yesterday came amid worries that Rhee's base was collapsing and threatening to pull Mayor Fenty down with her. They even had to bring former Baltimore mayor, Kurt Schmoke into town to mediate the deal and pitch it as a win-win. But it was clear all along that it was Rhee who was in retreat. The union, with AFT prez Randi Weingarten calling the shots for Pres. Parker, had agreed all along to negotiate a voluntary performance-pay program, so long as it wasn't based exclusively on student test scores. The shaky part of the deal was an agreement by the private foundations to underwrite promised teacher pay raises to the tune of $64 million. What happens when the private money runs out or if the foundations renege? I guess Weingarten understandably felt that in times like these, you can't look beyond the short run.

Rhee's strategy had been nothing less than shattering D.C.'s teachers union and overriding the teachers collective bargaining agreement with the district. Broom in hand, she promised her patrons at Broad and Gates, that she would close schools, turn them over to private management companies and the Archdiocese, and sweep away teacher tenure and fire teachers in mass.

The new pact, reveals the softer side of Rhee, a side that is willing to negotiate, find common ground, and make big concessions in exchange for a little face-saving. Gone, at least for now, is the daily teacher bashing. Remember when she riffed more than 200 teachers, claiming that they had "had sex with children?" Remember, Rhee's people forcing the Post to remove Bill Turque's unfavorable column?

The contract, if and when it is ratified by the rank-and-file, is a life raft, thrown by Weingarten, that Rhee (and Dunn) hope can keep her, Parker, and Fenty afloat, at least until after the elections. The new contract is already being hailed as the new national model for the Race To The Top crowd. Maybe it will push the Central Falls firings out of sight, out of mind for a while.
Posted by Mike Klonsky at 6:12 AM