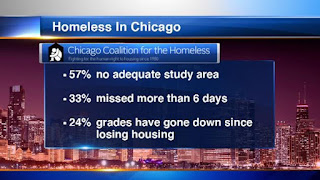 Last night I was watching CBS News Chicago. I was surprised when I saw their report on the city's homeless children, putting the number at 11,447. It sounded low to me. I assume it's from the latest report by the Chicago Coalition for the Homeless. But that number includes only young people aged 14-21. ABC 7 reports that there are more that 20,000 homeless students in Chicago Public Schools.

To put that in perspective, that's about one in every 20 CPS students, the great majority being African-American or Latino.

CPS's Nancy B. Jefferson school and the Juvenile Detention Center, is packed with homeless kids, many of whom have committed no crime other than being homeless.

The number of homeless families in Chicago has tripled over the last dozen years, says CCH.

Corporate school reformers love to talk about their so-called, "no excuses" schools. But homelessness is not an excuse, but a fact.

There's only a  small body of academic research and literature that focuses on the academic achievement of homeless children. But everything I've read points to the conclusion that poverty and homelessness have a much greater impact on measurable student learning outcomes than any classroom variables.

It generally indicates that homeless children score poorly on standardized reading and mathematics tests and are often required to repeat a grade.

For one thing, homeless families with children move a lot, often from shelter to shelter. That often means lots of different schools, teachers, and high absentee rates. Many CPS schools, especially charters and selective-enrollment schools tend to push homeless kids out, or not accept them at all.


Fifty-six percent of the 118 homeless Chicago families with school-aged children that were surveyed said they moved between two or three times over a three-year period, and 20 percent reported living at four to six different residences during that time period.

Meanwhile, 57 percent of parents said their child lacked an adequate study area when they were homeless, and 66 percent reported changes in their child's behavior at school since losing permanent housing. Of the families surveyed, nearly 33 percent of the children missed six days of school last year and 17 percent missed more than 10 days.

This doesn't even touch the psychological effects of homelessness on children or their susceptibility to sexual abuse and violence.

Homelessness by the numbers from CCH report:

$17,160: The annual salary for someone working a full-time minimum wage job in Chicago.

44 percent: The percentage of a full-time minimum wage worker's paycheck that goes toward housing at the median fair market price in Illinois.

At Wednesday's CCH presser, Latoya Ellis, a single parent of three whose family became homeless in August due to a lack of affordable housing, spoke to the educational challenges her children, ages 8, 14 and 16, face as a result of their housing status.


"Children need structure and routine, and due to homelessness, I as a parent cannot provide that, because I have no control over certain things like what time the lights go off. My children are often left trying to do their homework by the light of the cellphone, or on the bus on the way to school the next morning or sometimes even in class the next day," she said. "There are constant distractions that keep them from sleeping and getting a good night's rest so, as a result, they sleep during class time."

With Gov. Rauner's devastating cuts in support services for homeless families and children, those numbers will certainly go up. Consider it the next time you hear the words, "no excuses" or Mayor Emanuel's call for "better parenting" or for evaluating schools and teachers primarily on the basis of student standardized test scores.