In The Mailbox: From State Rep. Will Guzzardi

As you may know, in August I joined over 40 of my fellow legislators to co-sponsor HB 4268, which will create an elected school board for Chicago Public Schools. This has been an issue of the upmost importance to me for many years, and I’m happy to see the legislature finally respond to the thousands of dedicated parents and organizers in this fight. In an effort to help educate my constituents more about why this reform is so necessary — and to hear directly from you on the issue — I'm holding a forum on Thursday, November 19th at Armitage Baptist Church, 2451 N Kedzie Blvd, at 6:30pm.

As I've stated before, CPS is the only school district in the entire state (and one of only a few in the country) that doesn't have an elected school board. That means that we're the only school district where the mayor gets to single-handedly decide what’s best for our students, teachers and parents. In every other district in Illinois, the people making decisions about our school are directly accountable to the communities those schools serve. Given the track record of CPS leadership, there's no reason why Chicago should be any different. We've had over 20 years of mayoral control, and it hasn’t produced any better outcomes. In fact, all we've seen is scandal after scandal, insider deals, massive over-testing of our students, and ever more money being dumped into charters with no positive results.
Let's discuss a better way forward!
What: Elected Representative School Board Forum
When: November 19th at 6:30pm
Where: Armitage Baptist Church, 2451 N Kedzie Blvd, 60647 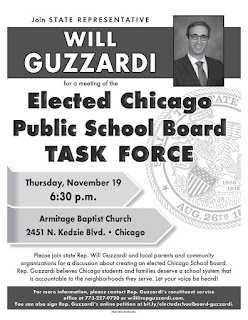 Email ThisBlogThis!Share to TwitterShare to FacebookShare to Pinterest
Labels: elected school board, Guzzardi