Corporate media turns the 1st Amendment on its head in Missouri 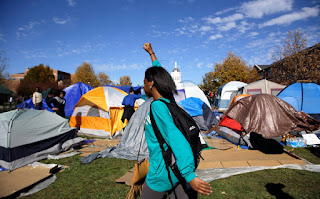 The First Amendment (Amendment I) to the United States Constitution prohibits the making of any law... infringing on the freedom of the press, interfering with the right to peaceably assemble or prohibiting the petitioning for a governmental redress of grievances.

Isn't it amazing the way giant corporate media, from TV news networks to NYT, WSJ, have been able to turn the University of Missouri black student protests upside-down in just a day?

Now the story is no longer about campus racism, threats of violence against black students, or an unresponsive school administration. No, now it's all about the new American paparazzi supposedly being denied its "1st Amendment rights" to photograph unwilling students and eavesdrop on their private conversations.

By whom? Not by the government "making any law...infringing on the freedom of the press." But supposedly by some black student protesters and a journalism professor.

How the script has been flipped.

The irony here is that this same corporate media totally blacked-out (no pun intended) any and all news coverage of the racist assaults on the students until U of M footballers stood up to be counted and the president's job was threatened. Is it any wonder that there's student distrust of the media?

This is not to say that the students and faculty member who jostled the ESPN stringer were right to do so. But either way, it's no federal case and after the initial hassle, it seemed like they worked things out. The faculty member apologized (she lost her job), and reporters were allowed entry to the gathering.

Now the Chicago Tribune, that bastion of 1st Amendment rights (remember their call for a Mussolini type to run the public schools) chimes in with an-- "How dare they!" -- editorial denouncing the students.


In a baffling display of dissonance, the protesters had pitched their tents in a public space — on a taxpayer-funded campus that is home to one of the best journalism schools in the nation — and posted a "NO MEDIA" sign.

The Tribune doesn't mention that the students had every right to this "public space" and, at least in my opinion, every right to defend themselves against violations of their own space and privacy. ESPN was the outsider here. I'm not even certain that the antagonist was a bona fide reporter. It's interesting that none of the real working journalists have made themselves the center of this story.

I can tell you from my own years as a journalist, I could never just walk onto a public school campus or any other "public space" and automatically gain entrance to meetings or take pictures of students without permission. It would have been a clear violation of school policy and -- dare I say -- journalistic ethics.

Journalistic ethics? What am I even talking about here? The Tribune Company, infamous for its Sam Zell-style buying/selling/takeover strategies and stripping its paper of working reporters and photographers, has none as far as I can tell. They're not the only ones. The Sun-Times fired each and every one of their photographers in 2013, replacing them with stringers with phone cameras. What could possibly go wrong?

The Trib's Eric Zorn, as usual, is the worst in writing about the protest. He refers to U of M President Tim Wolfe's resignation as "the fruits of extortion".

The Trib's sister paper the L.A. Times is once again up for sale to the highest bidder -- most likely, the Koch Bros., Rupert Murdoch, or Eli Broad. And education reporting is now being directly underwritten by billionaire corporate reformers.


Three of the Times’ benefactors — the K&F Baxter Family Foundation, the Wasserman Foundation, and the Eli and Edythe Broad Foundation — have been major supporters of charter and school-privatization efforts that are strongly opposed by teachers’ unions.

Thus, you now have editorials like this one: "It's time to stop the whining about charter schools."

So much for "free press."

Yes, there are serious threats to our 1st Amendment rights and press freedom, but they're not coming from protesting black students at Missouri.

And while corporate media continues to make itself out to be the victims here, the racist threats against U of Missouri black students continue unabated.