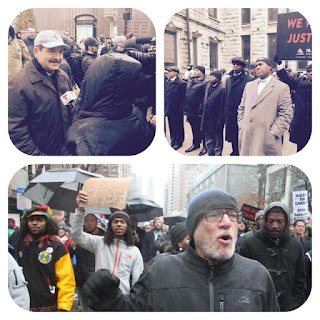 The first recorded use of the term “Black Friday” was applied not to holiday shopping madness, but to financial crisis: specifically, the crash of the U.S. gold market on September 24, 1869. Two notoriously ruthless Wall Street financiers, Jay Gould and Jim Fisk, worked together to buy up as much as they could of the nation’s gold, hoping to drive the price sky-high and sell it for astonishing profits. On that Friday in September, the conspiracy finally unraveled, sending the stock market into free-fall and bankrupting everyone from Wall Street barons to farmers.

Today's Black Friday protest called by Rev. Jesse Jackson, CTU Pres. Karen Lewis and other ministers and community-based organizations, targeted ongoing police violence and the cover-up by political leaders of the brutal killing of a black teenager by killer cop Van Dyke, who pumped 16 shots in the body Laquan McDonald.

Several thousand of us marched up Michigan Ave., rallied at the Water Tower, and disrupted business as usual on this, the busiest shopping day of the year. Our slogans called for the removal of those complicit in the cover-up and the delaying the release of the video and the charging of Van Dyke for 13 months -- Mayor Rahm Emanuel, Police Supt. Garry McCarthy, and States Atty. Anita Alvarez.

Be sure to read this commentary posted on NBC News by Temple Univ. Prof. Nicole Gonzalez Van Cleve. who's the author of the forthcoming book, "Crook County: Racism and Injustice in America's Criminal Courts." Van Cleve's point is that this is a matter of institutionalized racism, not a case of a few bad apples.


...they are merely the figureheads of an entire criminal court system fueled by racism. A court system where the death of another black boy barely makes anyone stand up and take notice and staying quiet about the police officers involved in the shooting is considered a professional courtesy amongst peers.

Mom from Ohio explains to son why protesters are on Mag Mile: "they shot a man 16 times.." #LaquanMcDonald https://t.co/dtBNDpfntn
— DNAinfo.com Chicago (@DNAinfoCHI) November 27, 2015