The widespread contrition permeating Davos is matched by an unnerving feeling of paralysis. The people here -- and we are talking about some of the most influential people on the planet -- seem confused, at a loss about how to attack the financial crisis. No one seems to think that the steps being taken are sufficient. It's as if we are watching things unravel -- how many times, for example, are we gong to hear that layoffs have exceeded expectations? -- but are powerless to stop the unraveling.

The captains of capitalism got an earful on the first day of the World Economic Forum in Davos, Switzerland, where panelists and attendees took the world’s financiers to task for, among other things, hobbling the world economy and collecting bonuses for the privilege. It was a remarkable tone that reflected the feeling of gloom hanging over this year’s gathering of politicians, corporate bosses and other dignitaries.

The leaders of the former bastions of the Communist bloc — Prime Minister Vladimir V. Putin of Russia and Wen Jiabao, the Chinese premier — took the stage here Wednesday to rebuke their capitalist brothers for dragging the world into crisis but also to assure them that, working together, they can rapidly restore the global economy to health.

Posted by Mike Klonsky at 12:25 PM No comments:

Email ThisBlogThis!Share to TwitterShare to FacebookShare to Pinterest
Labels: Davos

Who's advising this guy? 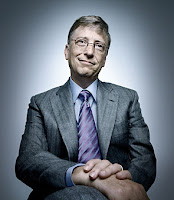 Bill Gates has given up on trying to restructure large, factory-model high schools. School change is "too difficult” and scores don't rise fast enough, says Gates in his latest missive to the masses. His new plan? Tell parents, they're on their own:

If you want your child to get the best education possible, it is actually more important to get him assigned to a great teacher than to a great school.

Will someone besides me, please tell the emperor to put some clothes on.

Posted by Mike Klonsky at 4:50 PM No comments: 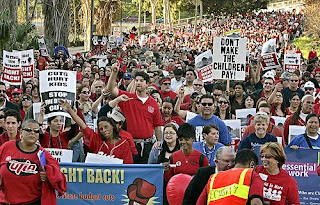 "I just love teaching kids, and I came to fight for our jobs and our students," said Francis, a second-year teacher who, at the moment, has no Plan B if she loses her job. "I just hope I can continue doing what I love to do."

Republican congressmen and conservative think tanks have rallied behind Rush Limbaugh and have mounted a media campaign to oppose Barack Obama's education stimulus package. Limbaugh's move up the Republic food chain from radio kook to erstwhile congressional caucus leader shows how far right the party has moved and how isolated it's become since Obama's election victory.

The stimulus would more than double the current federal commitment to public education, in this time of desperate need, and offer an alternative to the past unfunded mandates of Bush's No Child Left Behind era.

Educators have long said two programs — Title I aid to poor children and funding for the Individuals With Disabilities Education Act (IDEA) — are vastly underfunded. Duncan, the former Chicago Public Schools CEO, agreed, saying he's been "on the other side of this fence" for years. "This is righting a historical injustice, a historical wrong," he said. "These have been desperately underfunded, in some cases for decades."

The new Obama school stimulus package has lots going for early childhood programs, teacher preparation and new school construction. It is estimated that it could save thousands of teachers’ jobs, thereby keeping class sizes from shooting out the roof.

But for the Limbaugh Party it’s all gloom and doom, since like Rush, many members in Congress and in the conservative think tanks, hope for and predict failure for an Obama-led reform.

Just listen to Fordham think-tankers Finn & Petrilli writing in the latest Forbes (“Will the recession kill school reform?”). They equate money for early childhood programs as crack for a junkie.

Even $100 billion of federal largesse won't be enough to plug the holes in school budgets over the next several years. The sick patient isn't cured. Rather, this whopping cash injection is more like an anesthetic that delays the pain for another day--when, no doubt, education lobbies will call for still more cash from Uncle Sam.

They cite their pal Rick Hess from the American Enterprise Institute who, in the same vein (no pun intended) equates educators with bar boozers:

“It’s like an alcoholic at the end of the night when the bars close, and the solution is to open the bar for another hour,” Mr. Hess said.

Finally, they are still bummed out that one of their Michelle Rhee/Joel Klein types, didn’t get tapped for the Sec. of Ed job.

Posted by Mike Klonsky at 12:35 PM No comments: