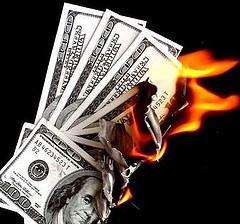 As Rahm Emanuel is about to hit city residents with the biggest property tax increase in history, there's another hidden tax we already pay. It's one Rahm never mentioned in recent budget hearings. I  call it the corruption tax, and it's a big one.

According to a recent study, everyone in this state pays an annual corruption tax of $1.308 and Chicago remains the "corruption capital" of the U.S. with 1,642 public corruption convictions from 1976 through 2013. That total has obviously risen in the past two years.

The latest installment of the tax will go to pay the lawyers defending the CPS Gang of 4, charged or implicated in the SUPES scandal. That's Barbara Byrd-Bennett and her three aides (who've also been named as perps in Detroit's Houghton Mifflin Harcourt corruption scandal) Sherry Ulery, Rosemary Herpel and Tracy Martin. While CPS isn't currently on the hook for Byrd-Bennett's criminal defense lawyers, they (we) are still paying a hefty sum for her salary, benefits and golden parachute contributions.

According to the Sun-Times, Chicago Public Schools’ lawyers’ bills for the corruption case that took down BBB have already topped $280,000. And things are just getting started.

Then there's the millions in lost services from SUPES and possibly other contracts steered by BBB, like the one to Global Workplace Solutions. They won the $30.9 million bid to help Rahm close 50 schools. A portion of the business was subcontracted to a company called The Robert Bobb Group, a company run by Robert Bobb, the former Emergency Financial Manager for Detroit Public Schools. Bobb hired Byrd-Bennett in Detroit in 2009 as Chief Academic Auditor and paid her a salary of $18,000 per month.

Of course, that's a drop in the bucket compared to the more than $100 million the city has already spent on on settlements and legal fees in the case of of CPD torturer Jon Burge and his crew. But it still could add up to millions more by the time the trials and investigations are over.

Who still thinks that making CPS a wing of Chicago City Hall, under the autocratic rule of the mayor, is a good idea?