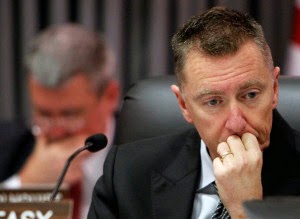 From L.A. school board's statement on the departure of Supt. John Deasy:


The Board "does not believe that the superintendent engaged in any ethical violations or unlawful acts."

Not exactly the carefully-chosen words you want to see in a reference letter from a former employer. I mean, it should go without saying. Shouldn't it?

But if Deasy isn't greasy, why isn't the board sharing its internal probe of the iPad contracting process?

And here we go with the third go-round of Ray Cortines, the 82-year-old, don't make waves, utility manager, who will keep the seat warm until Bill and Eli can find another hatchet man for LAUSD.