A 'breach in the wall' at the Sun-Times. How will it play out for Rahm?

The Ward Room's Mark Anderson has the best take on the Sun-Times/Rauner/McKinney debacle. He's smart enough to look beyond its immediate impact on the (I know I am, but what are you) gov's race and see how things might play out for S-T editorial board pal, Rahm Emanuel in February's race for mayor.

Anderson points out how the S-T editorial board sold its soul and the paper's credibility by doing Rauner's bidding, throwing ace reporter David McKinney under the bus and then endorsing Rauner over Quinn.

McKinney deserves a SmallTalk Salute for his resignation letter to Rauner-puppy-dog bosses, Ferro, Knight and Kirk. He's right on time when he writes:


Readers of the Sun-Times need to be able to trust the paper. They need to know a wall exists between owners and the newsroom to preserve the integrity of what is published. A breach in that wall exists at the Sun-Times. It’s had a chilling effect in the newsroom. While I don’t speak for my colleagues, I’m aware that many share my concern. I’m convinced this newspaper no longer has the backs of reporters like me.

I'm waiting to see what McKinney's brother and sister S-T reporters are going to say in an attempt to salvage their own professional and political integrity. Here Carol Marin's Tweet:


As for the upcoming mayor's race, Anderson writes:


The mayor has deep ties to a number of Sun-Times board members, just like Rauner. Members of the board, including Michael Ferro Jr. and Michael Sacks donated heavily to Emanuel’s 2011 campaign. The mayor parties with members of the board. Michael Sacks has been described as the mayor’s “go-to guy” on everything from the city’s parking meter deal to economic development.

That’s not to say a mayoral endorsement from the Sun-Times will be done in anything but the most transparent, above board way possible. But what if it’s not? This one certainly wasn't. There’s little doubt both the city and the state are facing an abundance of critical and difficult problems right now. Voters and concerned citizens need institutions like the Sun-Times to fulfill their role as unbiased, unimpeachable reporters of truth—even in the messy world of politics.

Did he really paint a scenario where Rahm is trailing in the race by double digits? I doubt it, but I like it. 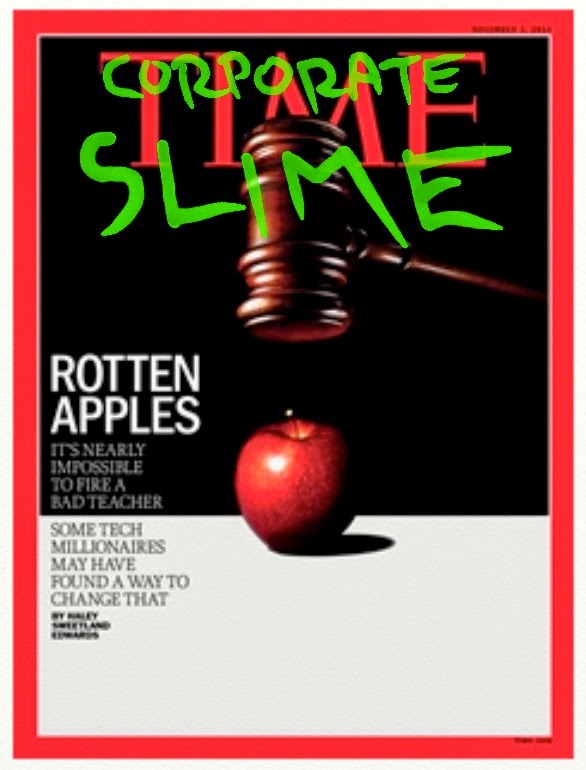 And speaking of no credibility... I'll let Brother Fred's take on the new Time cover say all that needs to be said.
Posted by Mike Klonsky at 6:12 AM