The school-to-jail pipeline is overflowing. Thousands of students, mostly black and Latino, are being arrested in school, many for what are considered minor violations of school discipline codes in white, wealthier schools. The result -- U.S. has the largest prison population in the world and nearly one out of every three American adults now are on the FBI's master criminal database.


A generation ago, schoolchildren caught fighting in the corridors, sassing a teacher or skipping class might have ended up in detention. Today, there’s a good chance they will end up in police custody...Over the past 20 years, prompted by changing police tactics and a zero-tolerance attitude toward small crimes, authorities have made more than a quarter of a billion arrests, the Federal Bureau of Investigation estimates. Nearly one out of every three American adults are on file in the FBI’s master criminal database.

According to the U.S. Education Department’s Office of Civil Rights, 260,000 students were reported, or “referred” in the official language, to law enforcement by schools in 2012, the most-recent available data. The survey also said 92,000 students were subject to school-related arrests. There are no earlier comparable numbers—the Education Department requested the data because it couldn’t find good national research on the topic. 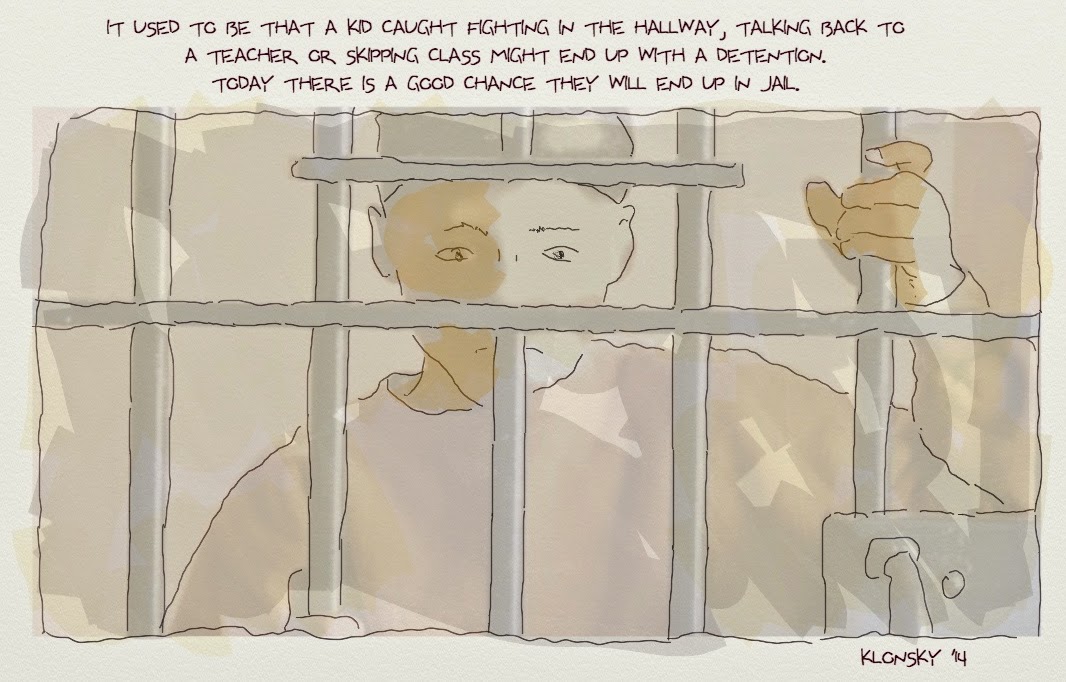 CHICAGO AMONG THE WORST...More so than in other large school districts, Chicago schools are quick to call in police to handle student misbehavior and conflict, according to a Catalyst Chicago analysis of data from the U.S. Department of Education’s Office of Civil Rights for the 2011-2012 school year (the most recent available).  In Chicago, police were called at a rate of nearly 18 cases for every 1,000 students, while New York City’s rate was 8 per 1,000 students and numbers in Los Angeles were 6 per 1,000.

Overall, CPS referred 7,157 students to law enforcement in 2012, of whom 2,418 students were arrested, according to the federal data. As is the case with school discipline in general, black males are disproportionately targeted

Increasingly, issues of classroom management and discipline are being taken out of the hands of educators and turned over to law enforcement. This certainly doesn't bode well for the future of the teaching profession or for our society.