Time to unite and keep the struggle alive 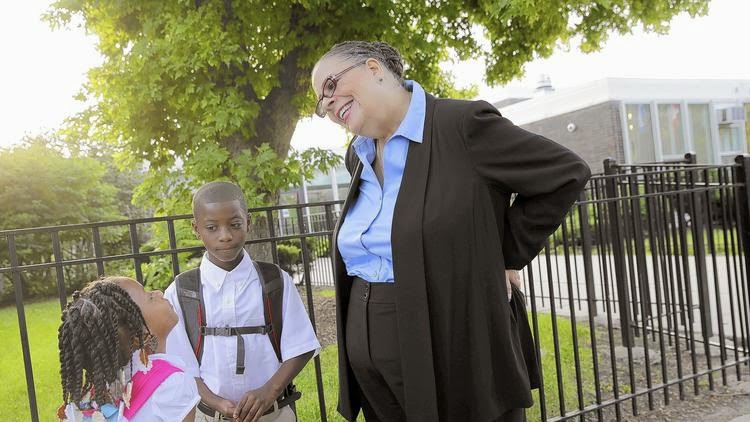 By now, everyone's heard the news that Karen Lewis has come through surgery for a brain tumor and now faces the struggle of her life, a long, difficult road back towards recovery. Our thoughts are with her and her family.

We've also heard, loud and clear, that she's no longer in the race for mayor, a stunning blow with just a little over four months to go before the election. Despite this devastating set-back, the movement continues and hope remains that the young corps of leadership in and outside of the CTU will step up and fill the void.

As far as the election is concerned, Rahm is still not out of the woods. His poll numbers continue to plummet and Ald. Bob Fioretti is still in the race.


"I have the pleasure of calling her a friend, and I join many across this city in praying for her health today. I can understand the battle with illness, and how it can change the best thought out plans. But I also know that Karen is resilient and strong and will be back advocating for educators … students … and Chicagoans in no time," Fioretti said.
"With my friend in the race, it would have been a little bit different dynamics," Fioretti said. "I've always said ... the day after the February (election), if there was a runoff, it would have been Karen and I."

I think he's right. Time to unite and keep the struggle alive.


“Karen Lewis has decided to not pursue a mayoral bid,” Jay Travis, the head of her mayoral exploratory committee said in a statement Monday “Yet she charges us to continue fighting for strong neighborhood schools, safe communities and good jobs for everyone.

“The tens of thousands of signatures collected for Karen confirm what the polls have already said: Chicagoans from Beverly to Uptown want to feel safe in their neighborhoods; they want an elected representative school board; and they want political leadership at every level that is responsive and responsible.”

Rahm's Achilles' heel continues to be his disastrous school "reform" policies, including his engineering the largest mass school closings in history, a kick in the gut of black and Latino communities throughout the city, along with his infatuation with privately run charter schools (and all things privatization).

Those policies took another major blow yesterday with the publication of a major study coming out of the University of Minnesota's Institute on Metropolitan Opportunity, headed by Myron Orfield. The study provides more compelling evidence that charter schools have worsened school segregation in Chicago and overall have had a crippling effect on the city's public schools.


Charter schools have become the cornerstone of school reform in Chicago and nationally.  Arne Duncan, who led Chicago schools and was a strong proponent of charters, became secretary of Education.  As Secretary Duncan has championed policies to dramatically expand the use of charters throughout the United States. Chicago, however, remains one of the nation’s lowest performing school districts.  Sadly the charters schools, which on average score lower that the Chicago public schools, have not improved the Chicago school system, but perhaps made it even weaker.  Further charters, which are even more likely to be single race schools than the already hyper segregated Chicago school system, have not increased interracial contact, an often- stated goal of charter systems.  Finally, the fact that Chicago charters use expulsion far more often that public schools deserves further study.  In the end it is unlikely that the Chicago charter school experience provides a model for improving urban education in other big city school districts.

And speaking of Duncan...his pal, Purdue University President Mitch Daniels, says he stands by his efforts to keep historian Howard Zinn's work from being taught in Indiana schools, saying the actions he took while governor were meant to keep the book out of the hands of K-12 students.


Daniels told reporters after a meeting of the board that a statement he made as governor that Indiana should "disqualify the propaganda" he saw being used in Indiana's teacher preparation courses was meant only to keep Zinn's "A People's History of the United States" from being taught in the state's K-12 classrooms.


"Now, few states have done a better job of coping with the recession than Indiana and I want to salute you -- Governor Daniels -- for your leadership and management skills. I also salute you for your leadership on education issues. You are among the 42 states that have voluntarily adopted college and career ready standards. You knew the bar here was too low and needed to be raised, even if that was hard to do. You are among the 46 states that developed bold reform plans to compete for Race to the Top."

Lie down with dogs, wake up with fleas.