What a scene yesterday! 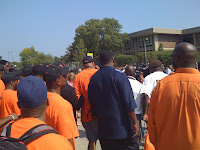 Imagine bus loads of black folks from the South Side pulling up in front of New Trier High in a wealthy, white, North Shore suburb. Some 3,000 students, parents and volunteer teachers (including me) come pouring out of the buses and line up to try and register kids at local, heavily-resourced schools while white neighborhood residents wave welcomes and applaud. As we get off the bus, the media chase Rev. Meeks across the street like paparazzi.

Meeks, along with 50 other black ministers, organized the school boycott is an attempt to draw attention to the fact that Illinois, one of the wealthiest states, is next to last in the state’s share of school funding. The Chicago Tribune called it "a civics lesson" for the hundreds of students who skipped school to ride the buses. They learned first-hand, that with an over-reliance on county-based property taxes, schools with the most expensive housing stock, lots of corporate headquarters and fancy malls get two to three times the resources as do their schools in the inner city. 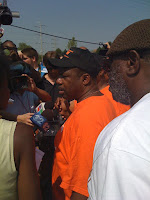 This has become one of the major civil rights stories of our time and has evoked similar responses as did the struggles of the ‘60s, including lots of liberal politicians, bureaucrats and even school reformers claiming to support the goals, "but not the tactics" of the movement.

Whatever the hand-wringing politicians and bureaucrats may think of his boycott tactics, Meeks has clearly already won this battle. The issue of fair and adequate funding for state public schools and for Chicago in particular, is now squarely on the table. He has emerged as the leader of the movement while Democratic leaders, from the Mayor to the Governor continue to do nothing.

I will never complain about my classroom environment again. Not after teaching an hour-long class on the political economics of Chicago school funding to 32 students, grades 5-12, on a school bus with no air-conditioning, windows wide open to catch a breeze in the 95-degree heat, as it raced up I-94 to New Trier H.S. But somehow, it all seemed to work. The kids seemed interested. They responded with lots of questions and volunteered facts they already knew ranging from the great divide—our two-tiered system of education, to the history of the civil-rights protests.

The kids learned a lot more, as several told me on the way back home, from the whole experience of visiting a school where the rich kids go and then attending a rally of 3,000 in the Forest Preserve, where they were fed lunch and listened to speeches and felt the real power of the Save Our Schools movement.

Not bad for the first day of school.

Mayor Daley’s attack on the thousand black parents who took their kids to the yesterday’s protest, didn’t go over well on the buses. Daley has been all over the media charging that students shouldn’t be involved in the protests. But as one member of Meeks congregation reminded me: “Where would we be today if whole families hadn’t marched together for freedom?” Meeks himself, evoked the memory of the heroic Little Rock 9 students who integrated Central High School back in 1957. 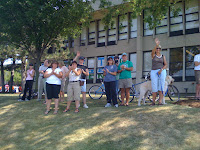 As for yesterday’s absences costing the district money, Daley/Duncan, if they truly supported the movement for funding equity, as they claim, should have made this an official field trip,
provided teachers and buses and fed the kids. Duncan could have taken a lesson from New Trier’s principal, educators and parents who provided cold water, snacks and opened up the school for the visitors. A large group of New Trier students, including student government leaders, came to the afternoon rally in a show of solidarity.

(Mike Klonsky Photos)
1. Getting off the buses
2. Meeks and the media
3. Net Trier parents greet us