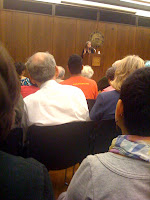 We made it over to UIC yesterday afternoon, early enough to grab some seats, to hear Democracy Now's Amy Goodman deliver a powerful and inspiring talk against the 9/11 backdrop, about the role of the media in a democratic society. Amy, a heroic model for budding journalists, was one of 40 media people arrested in St. Paul while covering the Republican Convention. Many were the targets of preemptive raids on local houses. Some 800 anti-war protesters were also arrested without so much as a blip on mainstream media coverage.

My embedded friend Sid, ‘60s radical-turned-Republican inner-circle honcho, (I call him “the prince of all sell-outs”) emails to tell me how much he hates Steve Schmidt (McCain’s Operations Chief).

Sid says that Schmidt (not McCain) is the guy who engineered Tuesday’s release of a vile, campaign ad , filled with lies, depicting Barack Obama as an advocate for “sex education for kindergarteners.” He says Schmidt has used this “sex trick” in past campaigns and it has always worked.

“The reason it works,” says Sid, “is that your opponent is always afraid to respond. Schmidt knows what Karl Rove taught him. If you keep throwing shit out there, a lot of it will stick. Plus you’re always controlling the agenda.”

I tell Sid, “Schmidt or no-Schmidt, the ad had to have McCain’s stamp of approval before it went out. And McCain claims to be the reformer in that filthy sewer you call a party.” I point out that McCain and Palin want to ban ALL sex education except abstinence-only. In this case, they didn’t even want kids to learn about the dangers of child predators and proper and improper touching. It’s all a cynical attempt to consolidate the party’s ultra-conservative base and among evangelicals.

I also warn him that Obama, unlike previous swift-boated Democrats, will not just sit there and take it. He will come out swinging.

It’s hard to type with your fingers crossed.

"Up to 5,000 freshmen at 20 Chicago public high schools will get cash for good--and even average--grades as part of a new, Harvard-designed test program that city education leaders are rolling out Thursday," the Tribune reports.

I always thought report cards were there to inform the student and parents how the student is progressing in different subject areas. For me, letter grades have never been an authentic way to assess students and their work. But now it's even worse. If a Chicago teacher gives a lower report card grade to a student, it amounts to taking money out of the kid’s pocket. Not much of a relationship builder, is it?

Remember the Gates Foundation's 3 R's jingle of two years ago--Rigor, Relevance, and Relationships? Now we see what it means as Chicago's Gates-funded Renaissance 2010 initiative gives up on real school change, opting instead for this cynical pay-for-grades scheme.


Ownership Society values being pushed in Chicago by the Daley/Duncan crew, replace social relationships with those of the factory. Chicago teachers are being put in the position of boss. Students are their workers. Grades and test scores are the commodity being produced by these child laborers on the basis of piecework. Not the kind of relationships we called for when we began the small schools movement some 20 years ago.
Posted by Mike Klonsky at 5:26 AM