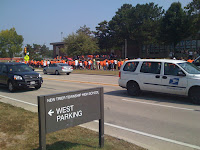 
Day-one at at CPS
The first day of school at Robeson, in Chicago’s Englewood neighborhood, went something like this:

Robeson High School’s first floor was full of parents trying to find out why their children weren’t already enrolled. Incoming freshman Tyler Wade registered last week. But when he showed up for class, he was told he was at the wrong school.

Wade and his fellow students should have joined the school boycott on Tuesday. They might have learned something on day-one.

Daley’s big lie
Daley tells the Trib the BIG LIE that Tuesday’s school boycott by 1,000 CPS students cost the district $100,000 in state reimbursements. If that were true, the state would be providing between $18-$20K/per student. If that were true, there wouldn’t have been the need for a student boycott to begin with.

"Civics lesson"
When the Mayor pulled 30,000 students out of school on June 10th for a Soldier Field political rally, he called it “the largest civics class in history.” Now he’s accusing Meeks and the boycotting parents of “using children as pawns.”

Daley golf partner, Eden Martin is president of the Civic Committee of the Commercial Club of Chicago. He’s also a lawyer for the giant utilities and corporate polluters and a big gun behind Mayor Daley’s so-called Renaissance 2010 Initiative. Like Daley, Martin blasts Rev. Meeks for leading Tuesday’s school boycott. Gee! What a surprise.
But Martin goes even farther than Daley in defending the two-tier system of public education, calling CPS a “monopoly” (you know how much Martin and the Civic Committee hate monopolies), bashing the teachers union, and opposing more funding for Chicago Public Schools.
Photos:
1. (Boycotting students at New Trier (M.Klonsky pic)
2. Eden Martin