No differences to bridge on phony Dems

Summer’s over. The leaves are turning. School is back in session and Bridging Differences is back on line to help us sort things out.

I don’t think Deb and Diane will have many differences to bridge over Ravitch’s latest post. Diane sticks it to both the phony Democrats at DFER and the D.C. media reform darlings, Mayor Fenty and Supt. Rhee.

Some formula for success. Some business model. So this is the strange new era we are embarked upon, in which the mantle of “reformer” has passed to those who would dismantle public education, piece by piece.

DFER’s voucher/union-bashing ship ran aground in Denver, despite big bucks from hedge-fund operator Whitney Tilson and lots of Gates/Broad $$$. All that money couldn’t buy them love inside the convention, says brother Fred at PREAPrez.

Speaking of smooth-operator Tilson, is he really in bed with the guy from Crazy Eddie’s and involved in a short-selling stock scandal involving CNBC business reporters? Hmmm.

Wow! My recent post on my good buddy Bill Gates made it all the way on to Gates Keepers. That’s the second time. The first was when I tried to free Vicki Phillips. 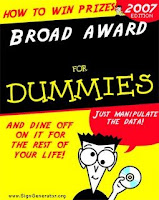 Next up—the annual Broad Prize, doubled this year to $2 million. But the dollars are small compared with the feather it puts in the cap of the winning superintendent who’s usually on his/her way to another district in a year or so. Here’s Edweek’s puffy description of the award:

The award is given annually to a city school district that has made notable strides in improving achievement, especially in closing gaps among students of different racial and ethnic groups.