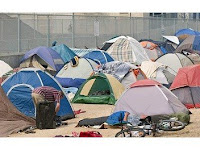 This tent city of 150 including lots of children, sprung up quickly in Reno, which has one of the highest home repossession rates in the U.S.

This should be food for thought for the "no excuses" schools-go-it-alone crowd, to digest.

The Washington DC based National Coalition for the Homeless says 61 percent of local and state homeless organizations have registered an increase in homeless people since 2007. Many in the growing homeless population are children. The problem is being attributed to home repossessions, the credit crunch and rising unemployment.

This can't be good for test scores. Can it?

Brown University’s Daily Herald tells how the Annenberg grant came to Chicago. Finally, some of the original Annenberg leaders are speaking out in response to the swift-boaters like Stanley Kurtz who attack the Chicago Annenberg Challenge (CAC) as a left-wing plot, in order to discredit Barack Obama.

The proposal to create the Chicago Annenberg Challenge described two main principles that would, and did, guide school reform in Chicago over the next six years. The first was giving more local control to individual schools and making decisions from the bottom up rather than from the top down.The second was forming partnerships with community organizations like museums and symphonies to create enriching experiences for students.

Annenberg’s National Director Barbara Cervone disputes the negative assessment of the grant often made on the basis of test scores alone. She says that evaluations using test scores for a program like the CAC was "a fool's errand."

What the Daily Herald piece doesn't say is that Walter Annenberg's public school reform grant marked the end of an era. The negative assessment of CAC now being pushed by politically-motivated conservative forces was used to set the stage for the rise of the new muscle philanthropists like Gates, Broad and Walton, who used their massive concentrations of corporate wealth to drive their version of "reform" from the top-down.