Leading mathematician debunks use of  VAM

The L.A. Times is once again publishing the names of every teacher in the district next to a concocted "value-added score." The reputations and careers of thousands of teachers hang in the balance with the Times' use of a bogus formula they claim can distinguish good teachers from bad ones, who should get "merit pay"and who should lose their jobs. 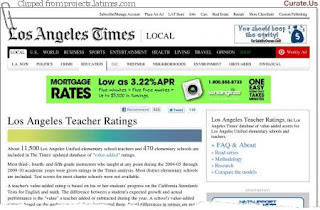 In a scene out of the theater of the absurd, even Supt. John Deasy and other district leaders are protesting the Times' release of this data, claiming the district is using a different, competing formula from the one used by the Times. Here's Deasy' formula:

The Deasy letter, obtained by education gadfly Alexander Russo and posted on his blog This Week in Education, warned:  “This is very likely to create confusion for many educators and parents.” [See the whole letter here.]

Here's what mathematician, John Ewing, president of Math for America has to say about the Times' bad math:


When value-added models were first conceived, even their most ardent supporters cautioned about their use [Sanders 1995, abstract]. They were a new tool that allowed us to make sense of mountains of data, using mathematics in the same way it was used to understand the growth of crops or the effects of a drug. But that tool was based on a statistical model, and inferences about individual teachers might not be valid, either because of faulty assumptions or because of normal (and expected) variation. -- WaPo Answer Sheet

Despite this apparent lack of validity, the use of "value-added" formulas as the basis for evaluating, paying and firing teachers, is rapidly becoming the new face of corporate reform with full approval coming from Arne Duncan and the DOE.
Posted by Mike Klonsky at 6:52 AM