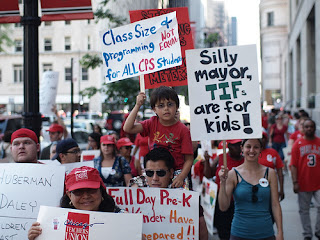 Since Blogger has been down for 2 days, I am posting my Friday FUs late in the day.

My first FU goes out to the Illinois Legislature for passing SB7, the most anti-teacher, anti-union piece of legislation is recent memory. The bill takes away teachers' job security, severely limits teacher collective-bargaining rights, including the right to strike, and basically destroys the ability of unions to represent their members with integrity by mandating how many votes are needed in a strike vote. SB7 also makes it easier for Chicago Mayor Emanuel to fire teachers in mass (something he is chomping at the bit to do), without due process, thereby increasing class sizes and replacing skilled, experienced, teachers with lower-paid newbies in schools where experience and stability count the most.

FUs especially go out to House members who voted 112 to 1 for passage, even after the CTU and the IFT withdrew their support and raised serious issues about the integrity and legality of the process. And a special FU to our Democratic Party so-called liberal "friends" who showed their anti-union, anti-teacher colors and voted as Boss Madigan instructed. Be sure and call on us again for support next election day.

Oh yes, and an extra special FU to the IEA leadership who not only fell in line behind the corporate reformers without so much as a yelp, but who hailed the bill as a model for the rest of the country.

And finally (is there ever a finally on this stuff?) FU to the Chicago Tribune for describing this piece of garbage legislation as "a sweeping set of education reforms" and  a budget "that would cut state money for schools throughout Illinois." Yes, "sweeping" reforms indeed. There is nothing--not one thing in this bill-- that has any solid research behind it indicating it will lead to an improvement in learning outcomes for our kids.
Posted by Mike Klonsky at 6:35 PM