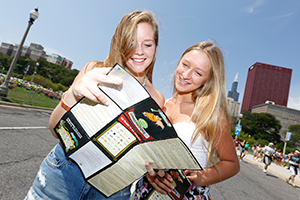 Chicago's biggest and priciest teeny-bopper rock festival jumps off this weekend. Thousands of mainly white, suburban kids are getting dropped off by parents in Grant Park, which is now surrounded by full length "NATO riot fences" to ease mom and dad's minds about the other (if you know what I mean). Many have paid the $250 needed for a 3-day pass (drugs not included) to hear favorites like Eminem, Outkast, Kings of Leon, etc...


It's enough to get the Mayor back chair-thrusting again.

SWEET DEAL...It's another windfall for Rahm's pals, money magnets C3 Presents trio of Charles Jones, Charles Attal and Charlie Walker who were given a 16-year, no-bid contract to put on Lollapalooza with relatively small tax revenues coming to the city. The 3 Charlies were the ones who hosted Rahm Emanuel's giant fund raiser at South By Southwest down in Austin last spring. I wrote about it here.


Okay, I know what you're thinking. The mayor promised not to take any campaign contributions from city contractors. No prob, says Rahm flack Sarah Hamilton who claims that the rule does not apply in this case because C3 Presents has its deal with the Park District -- not the City. Oh and Emanuel's travel to Texas will be paid for by the mayor's political campaign and not taxpayer dollars, says Hamilton.  Uh, yes, but that's a few hundred bucks he laying out in order to raise millions [in campaign funds].