Militarization vs. the Network Society 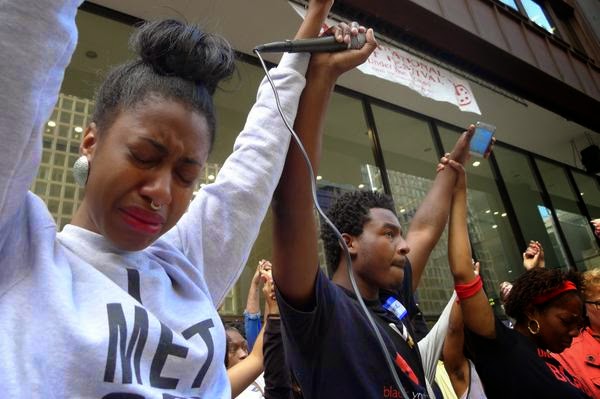 I was deeply moved yesterday evening, to be standing with more than a thousand fellow Chicagoans, hands raised in a gesture of solidarity with the family of Michael Brown and the courageous people of Ferguson, MO. Similar demonstrations are taking place in dozens of cities and on university campuses.

GAZA, MO...Coming on the heels of the Israeli assault on Gaza, the events in Ferguson, after the police killing of Michael Brown, raise so many questions. So many connections are being made. For one, I am fascinated by the role social media has played in both events, as a participatory, community and movement-building alternative or supplement to an ever-more tightly controlled news media. The military and police attacks on and jailing of journalists and censoring of news reports were central to both. 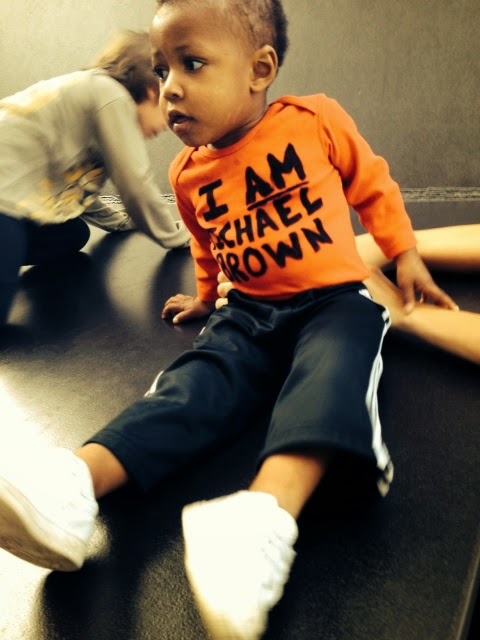 SEARCHING...As I was posting this, I did a Google search to find the articles I had previously read from NYT and other sources regarding Israeli censorship of  Gaza reports. I tried searching, REPORTERS CENSORED IN GAZA. Do it and see what you get. All the stories from NYT and others, seem to have been scrubbed and most of what you'll get are stories about Hamas censorship of reporters via Hillary and Netanyahu. How did they do that?

CASTELS...Preparing for the fall quarter which begins in a few weeks, I've gone back for a look at the writings and research on the topic of the network society by Spanish sociologist and USC prof, Manuel Castells. He was awarded the 2012 Holberg Prize, for having "shaped our understanding of the political dynamics of urban and global economies in the network society."

The social networks, including live, amateur video streaming were key is raising awareness about the transformation and militarization of many of our local police forces.

I was also amazed to see how Twitter lit up during the #Ferguson siege with tweets even coming in from the West Bank, (many thought they were coming from Gaza -- they weren't) offering advice to protesters and residents about how best to deal with tear gas and chemical attacks.

MILITARIZATION goes way beyond the police departments. You'll find it in the schools -- Chicago leads the nation in replacing neighborhood public schools with military academies -- and across the culture (movies, TV, advertising, sports, etc...).

But the militarization of police departments is the scariest, especially in black communities, where all-white departments, armed to the teeth with Afghan war killing power, seem more like an occupying force than anything to do with serve-and-protect. See  Bill Moyers' piece, "Not Just Ferguson: 11 Eye-Opening Facts About America’s Militarized Police Forces." Moyers says:


The “war on terror” has come home — and it’s wreaking havoc on innocent American lives. The culprit is the militarization of the police...Through laws and regulations like a provision in defense budgets that authorizes the Pentagon to transfer surplus military gear to police forces, local law enforcement agencies are using weapons found on the battlefields of South Asia and the Middle East.

WAR COMES HOME...Driving much of this is the Department of Defense's 1033 program, which Congress passed in 1997 to expand on a 1991 initiative, initially aimed at encouraging private sub-contractors to sell surplus military equipment meant for Iraq and Afghanistan to police departments for use in counter-narcotic and counter-terrorism situations. Of course there's no point in cash-starved communities spending billion on this stuff unless they are to be used. Look for two-three-many Fergusons to follow.


"We went through some pretty bad areas of Afghanistan, but we didn't wear that much gear," said Kyle Dykstra, an Army veteran and former security officer for the State Department. Dykstra specifically pointed out the bulletproof armor the officers were wearing around their shoulders, known as "Deltoid" armor.

"I can't think of a [protest] situation where the use of M4 [rifles] are merited," Fritz said. "I don't see it as a viable tactic in any scenario."

NOWHERE TO RUN...I'll end now. My head is exploding with the sound of low-flying bombers and fighter planes buzzing my humble abode in Logan Square. Yes, Logan Sqare, NOT Gaza or Kabul. Speaking of militarization, it's the damn Air and Water Show. Nowhere to run. Nowhere to hide.