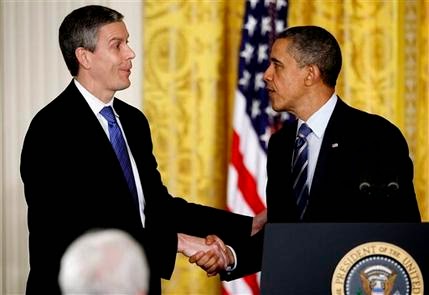 If you combine Bush and Obama, which is easy to do when it comes to education policy, we're coming up on 15 years of No Child Left Behind/Race To The Top (with waivers).

That will make 15 straight years of corporate-style, top-down, metrics-driven, test-based reform. That includes more than 6 years of Arne Duncan's unfettered, single-handed use of federal dollars to impose a system which promotes  mayoral control of   the schools, coupled with the closing thousands of public schools and replacing them with privately-run charters. This strategy, based on the notion of a speedy "radical disruption," has steamrolled along like the wars in Iraq and Afghanistan, with no need for a bipartisan consensus and with token opposition from Republicans.

It's likely that, in upcoming mid-term elections, it will be the Republicans who benefit from the growing public disenchantment with current education policies. (This despite the fact that mainline Republicans like Bush and Christie have been strong supporters of Duncan-ism.)

The Hill reports that Obama/Duncan school reform is faring poorly in the arena of public opinion -- meaning among the folks who use and pay for the nation's public schools and the folks who vote. Public support for President Obama’s education policies is plunging, according to the latest Gallup/PDK survey.


Only 27 percent of people give Obama an “A” or “B” for his support of public schools, down 9 percent from last year, in a new poll from PDK/Gallup that was released Wednesday. An equal amount of people — 27 percent — said Obama deserves a failing grade on education.

The Gallup poll found that 81% of the public had heard of Common Core, with 60% opposing it. The most common reason cited for opposition was the belief that the standards limit the flexibility of teachers.

This administration, despite its call for "better" tests, will go down as the greatest over-testers of children in history. The attachment of Common Core to a never-ending battery of standardized tests doesn't sit well with teachers or parents, and has cost Obama a splintering of his previously formidable base among teacher unions--the largest unions in the land.

Among the likely political victims of Duncanism are a group of big-city mayors who capitalized on the mayoral-control fad to push local versions of corporate-style reform. In addition to control of school policy, these mayors captured control over school contracts, prime real estate, and thousands of patronage jobs.

Remember, it was Duncan back in 2009, who promised that he would make mayoral control his number-one priority.


"At the end of my tenure, if only seven mayors are in control, I think I will have failed."