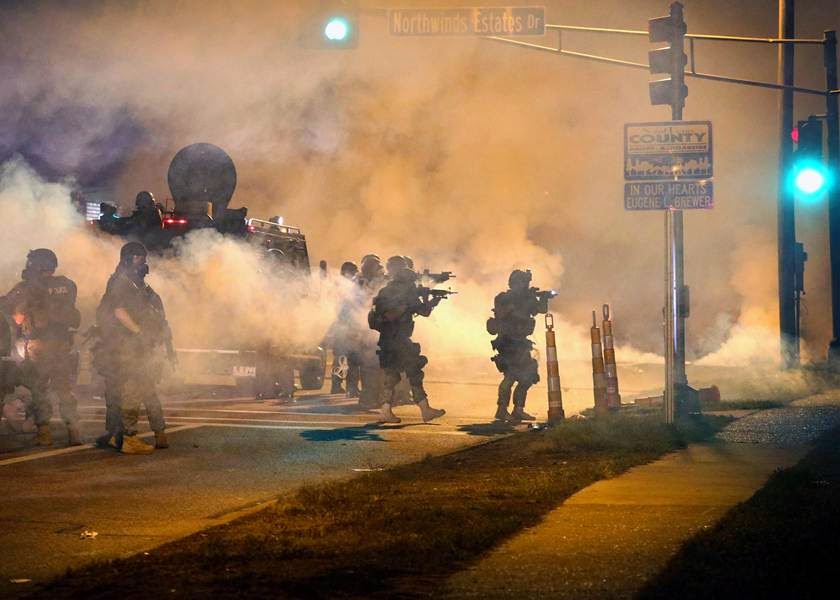 WATCHING FROM CAMBRIDGE, MA -- Worst Media Coverage Ever Award belongs to CBS News for this morning's headline: Michael Brown Protests in Ferguson Hijacked by 'Criminals' : Cops. Unless by "criminals" the headline was meant to refer to the Ferguson PD.

As the violent and terrifying Ferguson siege by militarized police forces, heads into Day 10, I'm still awed by the courage, anger, and desperate resistance shown by the mostly-peaceful and disciplined community protests against overwhelming odds. More live (on MSNBC) late night images of courageous youngsters ducking and dancing their way past armored vehicles, through the barrage of rubber bullets and tear-gas canisters, even daring to pick them up and return them to their rightful owners, jar memories of Watts '65, Harlem '64, Prague '68, Chicago '68, Tienanmen '89, Tahrir Square '2013 and Gaza last month.

Yes, 10 days since the murder of Michael Brown by Officer Wilson and still no arrest. Still no charges filed. What we know for sure from the various autopsy reports is that Brown was shot 6 times (including once in the palm of his raised hand and one in the top of his skull) as he stood passively, hands in the air. How many more autopsy reports do we need to see and how many federal investigations do we need to take place before an arrest is even made and charges filed? The struggle continues. No justice, no peace!

CAUTION... Three of Ferguson's four public schools remain closed but that doesn't mean children aren't getting Civics lessons from street teachers after being abandoned by city leaders and school administrators. A note posted on the Jennings School District website said the decision was made "out of an abundance of caution," and that the district anticipated starting the school year today.

I almost forgot another near-battle scene, this one handled with patience and restraint by authorities. That would be the confrontation in April between feds and an armed band of white-supremacists led by robber of public lands, Cliven Bundy. Yes, race matters when it comes to administering justice. Another Civics lesson for Ferguson kids.