The politics of water and schooling in Detroit 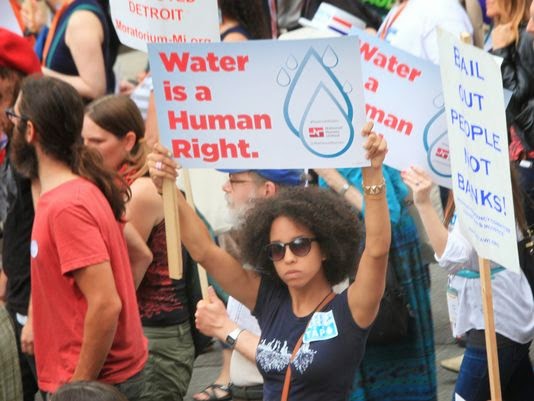 A SMALL VICTORY -- Ongoing protests against Detroit's massive water shut-off to the city's poorest have forced a restructuring in the city's already bankrupt government. The so-called Emergency Manager Kevyn Orr has handed over control of the Detroit Water and Sewerage Department (DWSD) to elected mayor, Mike Duggan.


Orr’s actions are a result of sustained and heroic activism by Detroit citizens, and a concomitant international outcry. Still, any victory they may be tempted to claim remains tenuous. Clause 6 of the order reads, “The EM may modify, amend, rescind, replace, supplement, or otherwise revise this Order at any time.” ("Detroit's Drought of Democracy")

And the reshuffling begs the question -- why is it that thousands of city residents can't afford drinking water?

The state takeover, led by Tea Party Gov. Rick Snyder has been a disaster for the state's poor and low-income workers.  Snyder had disbanded local elected governments and school boards, placing them in the hands of corporate managers.

Detroiters haven't been the only targets of water shut-offs. Across the state Hamtramck, Warren, Pontiac, Eastpointe, Romulus and other cities have shut off delinquent customers.


Writing for The Guardian, Martin Lukacs argues that Orr’s focus on privatizing the water utility, “a prized resource worth billions,” turns the shut-offs into “a way to make the balance-sheet more attractive in the lead up to its privatization.”

FOREIGN AID...W. Virginia environmental activists expressed solidarity in the form of more than 1,000 gallons of bottled water trucked into Detroit where more than 15,000 of the city’s poorest people have already had their water shut off — for being unable to pay their bill.

W.V. recently suffered its own water woes, with 300,000 people in its capital, Charleston, and surrounding areas told not to drink their water for several days after a January coal processing chemical spill.

As for the schools, Detroit's black community has also become the laboratory for class-size experiments like this one where 100 kindergartners are taught in one class. I suppose the aim is to prove Arne Duncan's thesis that class size doesn't matter.
Posted by Mike Klonsky at 10:42 AM