The Children Left Behind 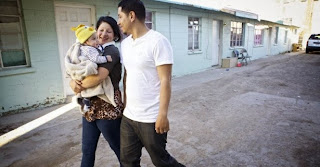 Thanks to journalist Debbie Nathan writing for In These Times, for putting a human face on the disaster that is No Child Left Behind.


Students began to notice weird goings-on at the international bridge near campus—specifically, Bowie administrators stationed there with cameras. What the students didn’t know was that García had ordered an employee to take photos of students crossing in the morning from Juárez to identify which ones did not live in El Paso. For generations, a custom of this bi-national community was to recognize that kids tended to have complicated citizenship and living arrangements, and it was far better to educate them than to deny them over where they slept at night. But Garcia’s main concern was that bi-national students tended to have limited English skills and would likely score low on TAKS tests. They needed to go.

Read the entire piece, "The Children Left Behind", here.

Michael Petrilli (top center in picture) has been appointed head of the right-wing Fordham Institute, a position he inherited from his mentor, Checker Finn. Readers will remember charter school hustler Finn from this 2009 quotable:

Petrilli will likely carry on Fordham's greed-is-good tradition only without Finn's smarts. He's the guy who, in a debate with Deb Meier, called for barring poor women from bearing children in the name of fighting poverty. Fordham (no relation to the university) has been a key player in the war on poverty -- only on the other side.


Here's another sign that the City Council's Black Caucus wants to distance itself from the increasingly unpopular Chicago Mayor who rapidly losing support in the black community and throughout the city.

Check out the heated exchange between between Alderman Jason Ervin and Chicago Police superintendent Garry McCarthy over whether the department is promoting minorities to high-ranking positions. Both men were admonished several times for cutting each other off, and Ervin took offense to McCarthy not looking at him while he was speaking.

But it was committee chairman Ald. Carrie Austin who refused to let McCarthy have the last word. "I'm going on to the next person. This is one day you gonna sit it down, because I'm the one running the show today," Austin told McCarthy.

As NBC5’S Political Reporter Mary Ann Ahern reports, there hasn’t been this kind of exchange before in the Emanuel administration.

Yes, another sign that Rahm can be had in the next election.