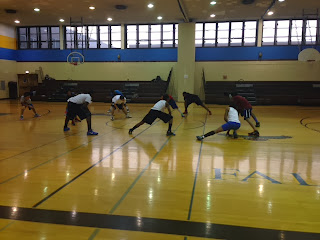 Yesterday was the first official day of basketball practice. Alexander Pope said, "Hope springs eternal." Well, at least in November before we've played our first game. I've got a promising squad of hard-working, fun-loving kids and even have some height for a change. What Pope didn't say is that "you can't teach height". That was the old Utah Jazz coach, Frank Layden.

Great news! Diane Ravitch's health has improved (I'm certain it was my matzo ball soup that did the trick) and she has been cleared by her doctors to travel to Chicago to speak on January 11th.

Saintly and patiently progressive Deb Meier lays out her views on democratic education in yet another round of debates at Bridging Differences. This time she's trying to find common ground with traditionalist educator and Common Core advocate, Robert Pondiscio. Pondiscio wrote in the Atlantic that he once considered himself a progressive teacher but now believes that he "damaged" his poor and urban students by teaching self-expressive writing instead of focusing on grammar, sentence structure, and mechanics (as if the two were separable to a good teacher).

Hopefully, this go-around will be a better than the last one when Deb took on the insufferable think-tank hack, Michael Petrilli. Makes me nostalgic for the days of the Meier/Ravitch blog tussles.

Arne Duncan's new flavor of the month is Career Education.

So I've changed my reform plan. Earlier I had advised Chicago schools to militarize their names, ie. Special Forces High School or Navy Seals Elementary, if they wanted to get adequate funding and survive the latest round of "reform."  But nationally, now I'm leaning more towards simply adding the words Career Academy to the school name in order to receive federal funding under Race To The Top. Take the case of Dunbar Early College High School in Dayton.


Dunbar was labeled underperforming, so in 2010, the school received money for an overhaul from the federal government, a favorite Duncan project known as "School Improvement Grants." At a later step in that transformation, Dunbar reinvented itself as an "early college" school. But recent visits to schools such as Dunbar, and Duncan's late October visit with President Barack Obama to a New York City school run in partnership with IBM, show that this mentality is shifting, at least rhetorically. At Pathways in Technology Early College High School in New York, Obama called on Congress to fund career education programs to help bolster the economy.

What's in a name? Shakespeare asked. Plenty, when it comes to funding schools.