Byrd-Bennett, the Great Disruptor, is at it again

“This is reflective of the [schools CEO Barbara Byrd-Bennett’s] commitment to bring stability to our communities after consolidating underutilized schools.” -- CPS Liar-in-Chief Becky Carroll.

Last week we heard this from CPS' number-two, Tim Cawley: “It is highly disruptive to relocate people from their existing school to another school.” He meant, of course, that it's disruptive only when kids from wealthier Lincoln Park were facing being moved to "underutilized" (100% black) Manierre. 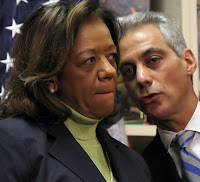 Today we read that Byrd-Bennett, while not currently planning more mass school closings this year, is still working on more smaller-scale disruption. In this case, she is planning to move Frazier into Herzl. Aside from increasing the chaos in the lives of kids and families, the move will double the size of Frazier (research, schmeesearch) and force turnaround school Herzl to compete for space and resources within its own home.


Natasha Edmondson, whose 8-year-old daughter attends Herzl, is concerned about the plan to move a new school in. She said she hadn’t heard about the proposal until a reporter called. Herzl, she said, is a “turnaround” school — a low-performing school that was academically overhauled — and the kids are just now getting used to the new teachers and principal, among other changes. “I really don’t think the kids need another change,” she said. “They’re finally starting to adjust to the changes that have been made.”

In Bronzeville, BBB wants to move Urban Prep into Doolittle West. Urban Prep in Bronzeville, an all-boys charter school, currently shares a building with Drake Elementary School. Doolittle West is now occupied by the Chicago High School for the Arts — known as ChiArts — which sources have said will move into the building that once housed Lafayette Elementary School, one of the schools that was closed.

Sorry if all this makes you dizzy. Just imagine how the students and their parents feel. Safe passage, everyone.
Posted by Mike Klonsky at 10:15 AM