The Chicago Teachers' Pension Fund on Monday charged that the already scandalized United Neighborhood Organization (UNO) had failed to make contributions for more than 90 certified teachers in its charter schools.


The teachers pension fund announced the results of an audit of the organization on the same day the network opened a new school, UNO Soccer Academy High School, whose construction was halted along with other new UNO campuses after Gov. Pat Quinn temporarily blocked a $98 million construction grant for the projects. Eventually, money was released after the Latino organization promised to put in place rules outlawing nepotism and conflicts of interest and added several new members to its boards. But two of those members recently resigned.

Jay Rehak, president of the pension fund's board of trustees, said a closer review of UNO came as part of a larger study of charters and their contributions to the pension fund.

While they continue to wring their hands over an impending pension fund crisis, Mayor Emanuel, Gov. Quinn and House Speaker Madigan continue to funnel millions in public funds to UNO pension fund robbers. 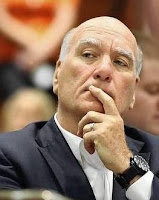 Where are the feds?

When asked why he is abandoning the race for governor, the man from J.P. Morgan responded:

Translation:  "I'm just another pension bomber, getting my ass kicked in the polls. Why throw any more good money after bad?"

And when Pat Quinn is beating you in the polls, you know all hope is lost.