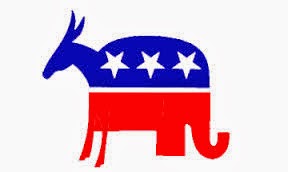 There are no real Democrats or Republicans in Chicago. The only symbol saluted here is neither the donkey nor the elephant, but the dollar sign. They've even abandoned the two-party system, for electing the mayor. And statewide, now you have two former Obama chiefs of staff and his former Secretary of State, seemingly cutting a deal to help a Republican venture capitalist candidate for governor defeat an incumbent Democrat.

Sneed reports that Bill Daley, the man from J.P. Morgan and former White House Chief of Staff, upon pulling out of the gubernatorial race — called incumbent Quinn "a loser" and pumped Republican gubernatorial candidate Bruce Rauner as "the strongest contender". Rauner is also a long-time pal and patron of the mayor -- himself a former Obama COS -- who has been telling insiders he wants Quinn out. Then into the fray jumps Hillary Clinton, to fire a barb at Quinn ("He's the luckiest politician...").

I haven't seen anything like this since 1983 when the entire Democratic Party machine turned Republican overnight, following the primary election victory of Harold Washington, who would become the city's first African-American mayor. Their slogan was "Bernard Epton before it's too late."

Funny thing is, there's hardly a dime's worth of difference between Rauner, Quinn, Daley or Rahm on the main issues of the day, which include raiding retirees' pension funds and protecting the corporations from having to pay their fair share of taxes to support public education and solve the budget crisis. This is a falling out among thieves.

After trying like hell to get rid of his Inspector General Joe Ferguson, Rahm retreated under public pressure and allowed IG Joe to stay on. But only on the condition that Ferguson abandon his 4-year contract after one year and limit his "investigative work" to helping Rahm get out from under Shakman constraints on political patronage.

I don't know why Ferguson agreed to such a deal, but if there was ever a good reason to keep Shakman intact, it's Rahm Emanuel. Greg Hinz at Crain's gives us the most recent example.


The successor to indicted Chicago comptroller Amer Ahmad has jumped to a private company that he may have helped extend and expand a lucrative city contract... Earlier in the week, I reported that acting Comptroller Andy Sheils is moving to Florida to take a job at a Fort Lauderdale medical-services provider. What I didn't know then was that the company, via a subsidiary, is a major vendor for Chicago, netting nearly $19 million since 2007 on a controversial contract that Mr. Sheils administered and worked on extending.

Says the BGA's Andy Shaw, “Since this is indirectly connected to the alleged criminal activity in Ohio of Chicago's former city comptroller, the BGA hopes that federal investigators here in Chicago are watching these new local developments with their usual microscopic vision."

I hope so too. Where are you, feds? You don't need a microscope.