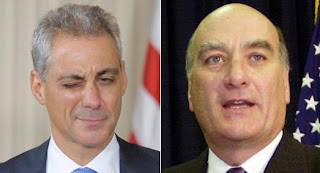 Billy Daley, the man from J.P. Morgan, who's apparently running for IL governor, claims that lots of people are asking him about Syria. No they're not.

Getting rid of the IG

I've met Chicago's Inspector General Joe Ferguson and he seems like a decent and honest enough guy. So it's no wonder that Rahm Emanuel has spent the better part of the year trying to get rid of him. I mean, who needs somebody, nobody sent, right?

But as one corrupt deal piled up on top of another -- from the UNO charter school fiasco, to robbing the schools of TIF funds to pay for DePaul's planned basketball arena, to the Midway privatization, to the forced drop in the city's bond rating, and on and on  -- the mayor has been losing the PR damage-control battle and his ratings are sinking lower than owl poop. The topper of course, came when his former comptroller, Amer Ahmad was indicted in Ohio.

So Rahm was forced to back off under pressure from his own guys, and rehire the IG for another 4-year term. The deal is that Ferguson will only be allowed to serve one of those years (til the heat cools down). And get this --- his job description will be limited to getting the city out from under the Shakman Decree and the "costly constraints of a federal hiring monitor."

I'm not sure why Ferguson bent and agreed to such a slimy deal. But if there was ever a reason to keep a city under the "constraints" of Shakman, it is Rahm Emanuel.

Need another reason for un-making CPS a wing of Rahm's City Hall and replacing mayoral control with an elected school board?

Oh, and speaking of Syria, my favorite quote yesterday, coming out of the let's-bomb-the-Syrians congressional debate, came from Chicago's own progressive Dem, Jan Schakowsky who has been so good on so many issues. But here she tells Sun-Times columnist Lynn Sweet, "While undecided, “I’m gettable".
Posted by Mike Klonsky at 6:20 AM