No Safe Passage... Guzzardi kicks off campaign... The face of poverty in Chicago

No Safe Passage for Javier


A 14-year-old boy was shot in the back outside a Chicago high school in the city's Ashburn neighborhood Thursday night after his mother said he denied having gang ties when confronted by a group of boys with a gun. Carmelita Rice told police her son, Javier Cameron, was passing by outside Sarah E. Goode STEM Academy around 7:45 p.m. Thursday to walk two girls home.  -- Huff Post Chicago

Sun-Times columnist Mark Brown calls it "the race to watch" in Chicago and he's right on. 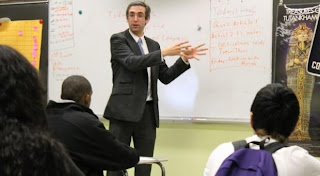 Will Guzzardi is up against the bloated power of Chicago's Democratic Party Machine. He's taking on pension grabber, Toni Berrios, the daughter of corrupt Party boss Joe Berrios.  He's also got Boss Madigan reportedly pressuring local pols to stay away from his campaign. But Guzzardi has shown he is a fighter, having come within 150 votes of knocking off Berrios in the last election. This time around, he's gained some campaign experience, broadened his base and has an army of young activists working the neighborhoods. He also got strong support from City Council's Progressive Caucus members like Scott Waguespack and John Arena who spoke at his campaign kick-off last night in Logan Square.

If Guzzardi can knock off Berrios in the 39th legislative election, things will be looking even worse for Rahm & Co. in the next mayor's race.

The face of poverty in Chicago

This study really caught my eye as I have been doing a lot of work recently in a predominantly African-American and low-income Chicago southern suburb. Lots of transplanted kids and families from Chicago's demolished public housing. More families with out-of-work parents in the wake of deindustrialization and economic crisis.


The numbers are from a recent study by the Social IMPACT Research Center, a program of the Chicago-based social service and advocacy non-profit Heartland Alliance. The study found a 50/50 split between low-income people who live in the city and in the suburbs, compared to a 66/34 split in 1990.

President Barack Obama's signature education initiative, the Race to the Top competition, is "impossible" at best and damaging at worst, argues a new, Broader Bolder (EPI) report. The authors's critique is strong but they are also little too diplomatic for my tastes, trying to find the bright side of RTTT and appealing to Obama to think about his personal "legacy." Good luck on that one.

Quote of the day

It comes from O2COOL exec Keith Jaffee whose company donated some 33,000 hand-held fans for distribution to Chicago's overheated students, victims of 100 degree temps and Rahm's longer-school-day dogma. Instead of closing schools or dismissing kids early, the mayor had some 17,000 hand-held fans distributed to kids in schools with no A/C. Shortly after the fans were distributed at Smyser Elementary School, where only the upper grades have air conditioning, a 6-year-old’s hair got caught in her fan and her teacher had to cut it out,


“It was done with no connection to the mayor,” Jaffee said. “We had merchandise that we wanted to donate. It was a hot couple of days. … (So) we were like, ‘What the heck, let's just give it to the schools.'

Jaffee is also on the board of the International Housewares Assoc. and was formerly CEO of Focus Products Group International, LLC

The Tribune reports that Emanuel's campaign fund has accepted $35,000 in recent years from people tied to O2COOL, which provided the fans. In January, Linda Usher, an O2COOL executive, donated $5,000 to Chicago for Rahm Emanuel.
Posted by Mike Klonsky at 1:56 PM