“The children all knew if you didn’t pass, you weren’t going on. A lot of them gave up. They weren’t trying to do any work. The attitude was, ‘What’s the difference? I failed.’”  -- Paula Peterson, principal at Charles Fairbanks Elementary in Indianapolis 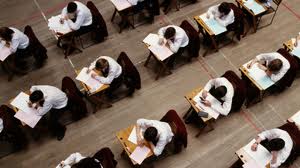 The testing madness, unleashed under No Child Left Behind and  still running amok under Race To The Top, is having devastating effects on hundreds of thousands of children and their families.  WaPo's Lindsey Layton reports that many states are now requiring children to pass a reading test in third grade or be held back from fourth grade.


But in an accountability era ushered in by the 2002 No Child Left Behind law, the new retention policies offer little wiggle room. Decisions are based on test scores, not the subjective judgment of teachers and administrators. Parents have little recourse. And individual students bear the impact, as opposed to an entire school being sanctioned for failing to perform.

The new approach began in earnest in 2002 in Florida under then-Gov. Jeb Bush (R), who promoted an education strategy that also featured private-school vouchers, data-based assessments for schools and teachers, charter schools and online learning.

Research done over the past 30 years, shows that retention, especially when based on a single test score rather than on the decision of the child's teachers, increases the chances of that child dropping out, exponentially. Fair Test offers a solid critique of retention along with good alternatives to both retention and so-called social-promotion.

What Layton's article fails to mention is that test-based retention's most devastating effects fall heaviest on black and Latino children and their families, since test scores more strongly correlate with poverty than any other factor.

If you are in Chicago, be sure and turn out on March 19th to hear Seattle test-boycott leader Jesse Hagopian and CTU Pres. Karen Lewis, make the case against high-stakes testing. The event starts at 7 p.m. at the Mt Carmel M B Church,  2976 S Wabash Ave.