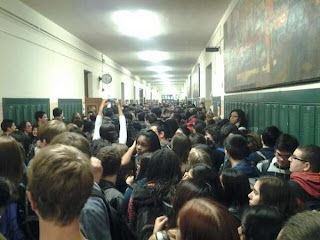 Hundreds of Lane Tech College Prep students attempted to hold a sit-in this morning inside the school library, in response to CPS' book banning.

Progress Illinois went to the school as classes began this morning but was told by one of the school’s assistant principals that members of the media were not allowed to attend the sit-in within the school or speak with faculty or students on school property about the protest, or other events, citing CPS’ communications policy.

PI reports that, Lane Tech students organized today’s 8 a.m. sit-in in the school’s library on Facebook and other social media platforms, however faculty broke it up about 20 minutes later, according to student reports on Twitter. Multiple students reported on Twitter that the library was locked and up to 400 students flooded the surrounding hallways.
And were those drones, I saw flying above Addison and Western this morning?

You laugh. But check out S-T liberal columnist Laura Washington, calling for drones "navigating the streets of Woodlawn, Englewood, Roseland. Steel-and-wired contraptions equipped to detect illicit activity on our corners, alleys and parks."
Posted by Mike Klonsky at 2:14 PM