In this morning's post, I greatly underestimated the arrogance and stupidity of the CPS autocrats. That's a sin that someone with my experience should never commit.

I assumed that the outrageous banning of the graphic novel Persepolis was the move of some misguided middle-level bureaucrat. But by this afternoon, CEO Byrd-Bennett had not only taken credit for the banning, she had doubled-down by declaring the book to be inappropriate for seventh-graders "because it contains "graphic language and images."

And here I always thought that graphic language and images were the mark of great literature -- especially of a graphic novel. I also thought that it was the job of teachers to guide their students towards developmentally-appropriate reading. Do we really need the schools CEO to decide for teachers which books to ban?

An award-winning work, Persepolis has been translated into more than 40 languages. It was published in the United States as two volumes in 2003 and 2004 and later as a single volume. It was chosen by the Young Adult Library Association as one of its recommended titles and named as one of “100 Best Books of the Decade” by the Times of London. 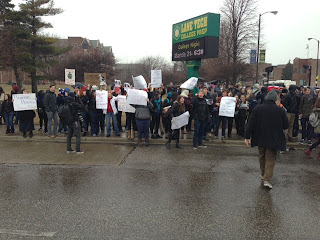 Lane Tech students and teachers are having none of it. Today, lots of them poured out onto the rain-soaked streets after school to demand an end to book banning. One student told me that she was quite able to decide for herself which books to read and what to think of them. A Lane teacher called the banning ridiculous and told me that he had assigned the book to his students two years ago. The principal of another school told me that she was ordering 10 copies of Persepolis for her school library.

As is usually the case, book banning soon turns into its opposite. The publishers of Persepolis must be grinning from ear to ear today after hearing the news from Chicago. Please ban more of our books, I can almost hear them appealing to CPS 'crats. As for Rahm, BBB & Co., I can't imagine this going well for them. Can you?
Posted by Mike Klonsky at 5:24 PM