Sound and fury over crowd estimate

The current dust-up about the various estimates of the crowd size at Wednesday's school closing protest qualifies as sound and fury, signifying nothing, to quote Will Shakespeare. What difference does it make whether the size of this particular march and rally  was 2,000 or 10,000?  The point is, it was big, loud and militant enough to be heard all the way up to the fifth floor of City Hall and in BBB's offices at CPS. The message was loud and clear and was picked up by the media. SAVE OUR SCHOOLS and HEY HEY. HO HO. RAHM EMANUEL'S GOT TO GO!

While the size of the protest may have paled in comparison to the rallies in support of the striking teachers last fall, it was still plenty big and deep. Mass civil disobedience arrests showed that the level of anger and commitment has risen  as the voice

Does anyone really doubt that the vast majority of the city's residents oppose Rahm's school closing plan? Just look at the polls. Wednesday's NBC News Flash Poll showed 78% of tens of thousands of participants favoring CTU prez Karen Lewis over Rahm on the school closing debate. Not even close. The weather and Spring break may have played a role, as well as Rahm's divide-and-rule tactics of selective targeting of closings. But that's neither here nor there. When you see unionists and school lunchroom ladies in hairnets sitting down in the middle of Clark St. and getting arrested by sympathetic Chicago cops, you know your time has come.

One question is still unanswered. Why the hell are Rahm's people, like CPD spokesman Adam Collins calling the Sun-Times City Desk, arguing with editors over the crowd estimate? How desperate and petty is the mayor? 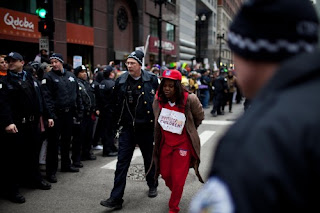 
During the civil rights movement in the 1960s, schools were built to provide a fundamental, essential resource in overcrowded African-American neighborhoods. Now, schools will be dismantled, along with the continued destruction of families, public housing, social services and employment opportunities.

The idea that the Tribune uses its biggest stage — the Sunday edition after the announcement of the largest mass school closing in U.S. history — to trumpet a loaded poll that blames teachers for problems in schools is unfortunate.