Sequestration: The language of the Ownership Society 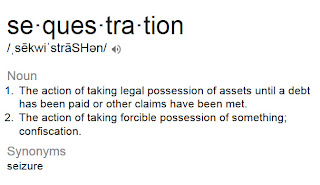 I'm always taken by the language of the Ownership Society. I'm dazzled by how it's used and misused to obfuscate and mystify. For example, I love the word sequestration. For one thing, as a blogger, I've gone about as far as I can go with the fiscal cliff, as in: "We're not afraid of the fiscal cliff. Many of us are already over it."  I even had the term banned as own of my New Year's resolutions. You've never heard it since then. Have you?

Of course, sequestration is nothing new. The working poor and the rapidly disintegrating middle class have been the targets of sequestration for the past three decades or more.

You could say it began with the dismantling of the labor unions during the Reagan years. Or maybe in the '90s with Clinton's so-called "welfare reform." Sequestration  currently takes the form of  foreclosures, the cutting of real earnings relative to productivity, pensions, and medical care for the sick and elderly, reduced access to education, and other so-called "entitlements." In general we've nearly all been sequestered to one degree or another, through the greatest redistribution ever of public wealth from the bottom to the top in response to the de-industrialization of America.

But now I'm all into sequestering those who deserve to be sequestered. Here in Chicago for example, I'd like Katten Muchin Rosenman, the law firm that swung the parking meter deal, to be sequestered. I was cursing at them just the other night after walking half-way up a long Lincoln Avenue  block in below-freezing weather. Late for a meeting. My numb fingers fumbling for 8 quarters. Dropping one in the snow. Damn, now trying to work a credit card into the slot and then finding out the buttons weren't working. Then having to walk on the icy sidewalk half a block back to the car and then a block back again to my destination. What is this but another form of sequestration?

Meanwhile, Richie Daley lands a cushy job with the law firm. I say, sequester their asses.

Actually, sequester his whole damn family. And while we're at it, how about a sequester for Rahm, too? Remember, he was the "new sheriff in town" who was going to play hardball with Chicago Parking Meters, LLC. He dropped that ball like a hot potato. Sequester him too.

Sun-Times wanted for aiding and abetting

And then there's the Chicago Sun-Times editorial board. I had hopes for them recently after their reporters did such a great job exposing the whole UNO charter school scandal (and while you're at it, sequester UNO's Juan Rangel, and Boss Madigan, please).

But today, the Sun-Times ran an editorial supporting the Nekritz pension-robbing bill (which has about as much chance of becoming law as a man walking through hell with his underpants soaked in gasoline). The Nekritz bill not only takes away cost-of-living increases for the elderly; it raises the retirement age (work 'til you drop) and shifts the  cost of paying for teacher pensions from the state to already cash-starved local school districts.

The S-T editors even admit that the bill is unconstitutional. In their words, "We worry it may violate a clause in the state Constitution that protects pension benefits."  Damn right it does.

Isn't it a crime to aid and abet a criminal who is knowingly engaged in an illegal act?Sequester them, please.

In considering these dramatic shifts in wealth seizure and redistribution, two important articles caught my attention and are worth a read. The first was this review by the Reader's Sam Worley of Christine Walley's new book, Exit Zero: Family and Class in Postindustrial Chicago. The second was a story in Sunday's New York Times -- "Recovery in U.S. Lifting Profits, Not Adding Jobs" by Nelson Schwartz.

They both shed light on what this latest version sequestration is all about.
Posted by Mike Klonsky at 12:06 PM